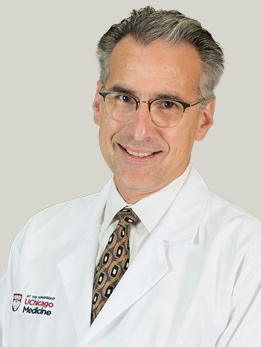 Close
773-702-6140
Request an Appointment Refer a Patient
Russell Cohen, MD, is a renowned gastroenterologist with clinical expertise in inflammatory bowel disease (IBD). Under his leadership, a multidisciplinary team of specialists in gastroenterology, surgery, pathology and radiology provide comprehensive care for patients with Crohn's disease and ulcerative colitis.

In addition to his clinical practice, Dr. Cohen is an active researcher. He has served as the principal investigator on several long-term studies designed to test the efficacy and safety of both oral and intravenous drugs in patients with inflammatory bowel disease.

Dr. Cohen serves as associate editor and ad-hoc reviewer for numerous medical journals, including The New England Journal of Medicine and The American Journal of Gastroenterology. He has published more than 30 scientific articles, 50 abstracts and 10 book chapters. He also is the editor of Inflammatory Bowel Disease: Diagnosis and Therapeutics, which is now in its second edition as a leading textbook in this field.

A dedicated educator and mentor, Dr. Cohen teaches medical students, residents and fellows about endoscopes and the pharmacology of gastroenterological drugs. In addition, he is frequently invited to deliver lectures at grand rounds and at national and international conferences on the diagnosis and management of IBD.

Dr. Cohen has been named one of the "Best Doctors in America" by Best Doctors, Inc. for more than 10 consecutive years and is consistently named one of Chicago's "Top Doctors" by Castle Connolly Medical Ltd.

Request an Appointment at UChicago Medicine at Ingalls - Tinley Park