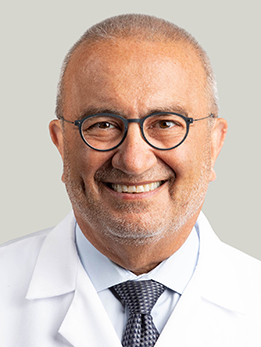 Issam A. Awad, MD, is an internationally recognized leader in neurosurgery. He is skilled in the surgical management of neurovascular conditions affecting the brain and spinal cord, including cerebral aneurysms, cerebrovascular malformations, carotid surgery, hemorrhagic stroke and skull base tumors. He leads the Neurovascular Surgery Program and co-leads the Stroke and Neurovascular Care team. Dr. Awad is the Director of the Safadi Program of Excellence in Clinical and Translational Neuroscience, and the Centers of Excellence for Cerebral Cavernous Malformations (CCM) and Hereditary Hemorrhagic Telangiectasia (HHT).

Dr. Awad’s research contributions have spanned several decades. His scientific innovations include the characterization of subcortical ischemic lesions in the aged, advances in the understanding of the natural history and biologic behavior of cerebral vascular malformations and numerous technical advances in neurovascular and epilepsy surgery.

Recognized as a pioneering and productive scholar, Dr. Awad has educated scores of neurosurgeon trainees and holds prominent editorial responsibilities. He has authored leading textbooks and published more than 350 scholarly papers related to clinical innovations, surgical outcomes and research.

Dr. Awad is director of the Safadi Program of Excellence in Clinical and Translational Neuroscience.

Dr. Awad helps collegiate hockey player Sam Messina get back on the ice after surgery to repair his arteriovenous malformation.

Dr. Awad reunited with a grateful patient 27 years after he performed surgery on her following a stroke.

A pill to prevent brain surgery? Dr. Awad and his colleagues are investigating a drug that may lower the risk for people with the familial form of CCM.