The University of Chicago Medicine has committed significant resources to increasing awareness of stroke symptoms and prevention. By educating the community about the risk of stroke, and by encouraging individuals to take action to minimize those risks, more lives will be spared from this devastating disease.

What is a Stroke?

A stroke (also called a "cerebrovascular accident") occurs when blood vessels carrying oxygen and other nutrients to a specific part of the brain suddenly burst or become blocked. When blood fails to get through to the affected parts of the brain, the oxygen supply is cut off, and brain cells begin to die.

Strokes fall into several major categories based on whether the disrupted blood supply is caused by a blocked blood vessel or a hemorrhage. Since each type of stroke has a different type of treatment, it is very important for the physician to determine the cause of the stroke, as well as the location, as quickly as possible.

Ischemic stroke results from a blocked blood vessel, either within an artery in the brain (thrombotic stroke), or in another artery within the body, and the clot or blockage breaks loose and travels to the brain (embolic stroke). Thrombotic is the most common type of ischemic stroke, with a blood clot forming inside an artery in the brain, blocking blood flow. Sometimes, the clot occurs in one of the neck arteries (carotid or vertebral) that transports blood from the heart to the brain.

Blood clots form most often in arteries damaged by atherosclerosis, a disease in which rough, fatty deposits build up on the walls of the arteries and project into the bloodstream. These deposits gradually narrow the passageway, causing the blood flow to slow down and, sometimes, to completely occlude (block) the artery.

The other main category of stroke, hemorrhagic stroke, occurs when a blood vessel in or around the brain ruptures, spilling blood into the brain or the area surrounding the brain. When this occurs, the cells nourished by the artery fail to get their normal supply of nutrients and cease to function properly.

Furthermore, the accumulated blood from the ruptured artery soon clots, displacing normal brain tissue and disrupting brain function. Cerebral hemorrhage is most likely to occur in people who suffer from a combination of atherosclerosis and high blood pressure.

About one-third of all strokes are preceded by one or more "mini-strokes," known as transient ischemic attacks (TIAs). TIAs can occur days, weeks or even months before a stroke. TIAs occur when a blood clot temporarily clogs an artery, and part of the brain does not get the blood it needs. The symptoms occur rapidly and last a relatively short time. Most TIAs last less than 5 minutes. The average is about a minute. Unlike stroke, when a TIA is over, there's no injury to the brain.

TIAs are extremely important predictors of stroke. Do not ignore them! If symptoms appear, call 911 to get immediate medical help. A doctor should determine if a TIA or stroke has occurred, or if it is another medical problem with similar symptoms. Prompt medical or surgical attention to these symptoms could prevent a fatal or disabling stroke from occurring.

What are stroke risk factors that can be avoided, treated or controlled?

What are stroke risk factors that cannot be avoided?

Stroke is the third leading cause of death in the United States, claiming nearly 700,000 lives every year. It is also one of the leading causes of disability among American adults. The good news is that stroke can be prevented. In fact, according to the National Stroke Association, up to 80 percent of strokes are preventable.

For your convenience and safety, we offer secure and easy virtual visits for most non-urgent visit types. Our care providers can assess your symptoms, make a diagnosis, recommend treatment and send prescriptions to your pharmacy.

Get a Second Opinion Online

Whether you are facing a complex health issue or difficult treatment decision, getting a second opinion can help you make an informed decision about your care. Get an online second opinion from one of our experts without having to leave home.

Complete an online questionnaire (e-visit) through your MyChart account to get a same-day diagnosis and a treatment plan from UChicago Medicine clinicians for common conditions. 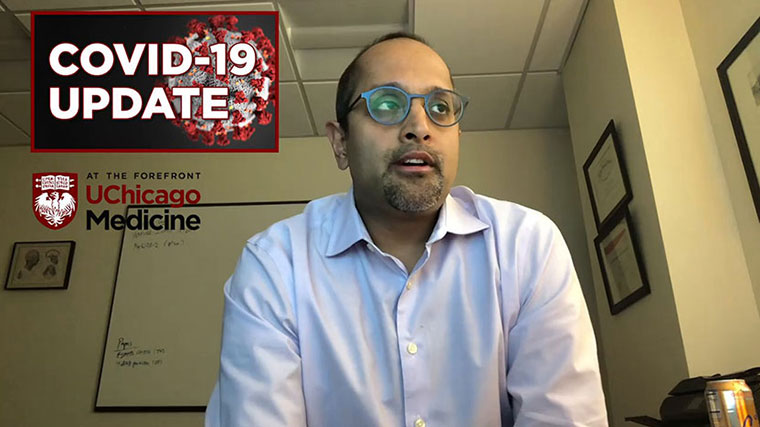