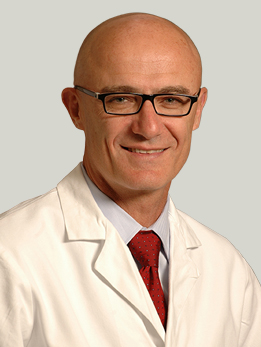 Arieh Shalhav, MD, is a pioneer in minimally invasive laparoscopic/robotic urologic surgery. He has extensive experience in laparoscopic surgery of the kidney. He is also an expert in performing prostate cancer surgery with the Da Vinci Surgical System – a robotic device used to perform minimally invasive surgeries. Dr. Shalhav was the first urologic surgeon in the region to use this advanced technique for prostate cancer surgery.

A skilled physician scientist, his research has enhanced medical professionals' understanding of the effects of renal ischemia — oxygen deficiency in the kidney — and ways to avoid its related damage during surgery. Additionally, Dr. Shalhav is working with researchers from the Argonne National Laboratories to develop an ice slurry — a fluid containing ice and salt water that would be used to protect the kidney during laparoscopic partial nephrectomy.

Dr. Shalhav also conducts extensive clinical outcome studies investigating minimally invasive surgery options for the treatment of urologic cancer. He has received awards for his clinical work, research, and teaching from the Society of Laparoendoscopic Surgeons and the Endourological Society.