A natural athlete, Luke excels in basketball, baseball and soccer.

Despite missing more than 100 days of elementary school due to illness and hospitalizations, Luke Clouser, of Bethalto, Ill., always kept up his grades. A natural athlete, the young boy also excelled in basketball, baseball and soccer.

“He never let pain stop him or define him,” said his father, Russ Clouser. “He has a lot of determination.”

When Luke was just 9 months old, he suddenly refused to eat or take a bottle and seemed to be in severe pain. “I had a gut feeling,” said Russ, “that Luke had pancreatitis, which runs in my family.” He and Luke’s mother, Lindsey Cook, took him to the emergency room.

Genetic tests at a St. Louis children’s hospital confirmed Luke has hereditary pancreatitis – a rare condition that causes inflammation in the pancreas.

When Russ was in his late teens, he was diagnosed with an acute form of the disease, which can cause abdominal pain, nausea and vomiting. He has been able to manage his pancreatic attacks with medication and diet.

But for Luke, pancreatitis became a chronic and progressive condition. The inflammation didn’t improve or heal over time, causing irreversible damage to his pancreas and the need for daily pain medication. 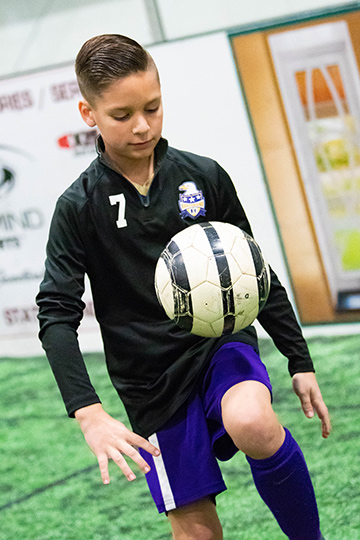 By his ninth birthday, he had been in the hospital more than 50 times. In the summer of 2018, Luke’s pediatric gastroenterologist told his parents "there is nothing more I can do for your child.” Having spent many years researching treatments, Russ and Lindsey knew the next step would be a pancreatectomy — surgery to remove the pancreas.

In most cases, removal of the pancreas relieves pain and other symptoms associated with pancreatitis. But without a pancreas, Luke would develop diabetes and become dependent on insulin.

The University of Chicago Medicine Comer Children’s Hospital is one of just a few centers in the country to perform an advanced surgery to address this problem in pediatric patients with pancreatitis. The procedure is called total pancreatectomy with islet autotransplantation, or TP-IAT.

During TP-IAT, pancreatic islet cells — which produce insulin to regulate blood sugar levels — are taken from the diseased pancreas after it is removed from the patient. These cells are then infused through a blood vessel into the patient’s liver where they can start making insulin.

Luke had the all-day TP-IAT surgery on August 27, 2018. Pediatric surgeon Mark Slidell, MD, and gastrointestinal surgeon Jeffrey Matthews, MD, worked together to remove his pancreas, gallbladder and spleen. As Slidell and Matthews reconstructed Luke’s gastrointestinal tract, Piotr Witkowski, MD, PhD, took the pancreas to a special lab in the hospital to isolate, remove and prepare the islets for infusion.

“Luke’s pancreas was severely damaged,” said Witkowski,”but the healthy islets we were able to transplant began helping to control his blood sugar within days of the procedure.”

Luke’s determination and resilience were evident the day after his operation. Surprising his nurses and doctors, he walked the entire hospital floor outside his room in the intensive care unit. He recovered quickly and it wasn’t long before he was back on the soccer field, playing pain-free and scoring goals for his team.

Today, Luke needs a small amount of daily insulin, but has no limitations on what he can eat. “So he goes right for hot dogs, donuts and desserts,” said his mom. “He is so happy.”

If you ask Luke what he thinks of going through major surgery for pancreatitis, he doesn’t hesitate to respond. “I would hands down do it again. It was so worth it.”

How living donor liver transplant works
Finding a living donor when you need an organ transplant
Patients with diabetes insulin-free for years after islet transplantation
Are you at risk for fatty liver disease?
The most common chronic liver condition: What is fatty liver disease and how is it treated?
Despite the pandemic, UChicago Medicine performed a record number of transplants in 2021, mirroring a nationwide trend
Interstitial Lung Disease Clinic provides specialized care for patients with chronic lung diseases
California man travels to UChicago Medicine for life-saving bloodless heart transplant from the nation’s most experienced team
New data: UChicago Medicine’s Heart Transplant Program earns country’s highest marks for success