Adverse reactions to foods, including eggs, milk, peanuts, tree nuts, wheat, shellfish and soy, are on the rise, especially among children. The CDC reports (PDF) that between 1997 and 2007, food allergies increased 18 percent in children under the age of 18. While we generally categorize all adverse reactions as "allergies," they actually cover a range of immune system responses and disorders of the digestive system, each with its own causes and varying levels of severity. 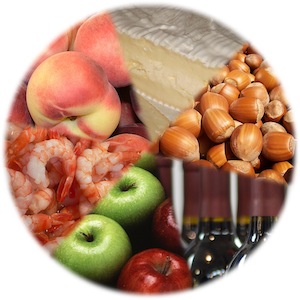 While bad reactions to food are extremely common, only a few can be defined as allergic reactions. An allergic reaction is caused by an immune system response to a specific allergen present in food, such as the proteins in cow's milk or soybeans. If a person with a food allergy is exposed to these proteins, their body flags them with Immunoglobulin E (IgE) antibodies, which normally help fight parasites. The body's immune system then mistakenly thinks these proteins are harmful and triggers an allergic reaction, such as skin rash, gastrointestinal or respiratory distress and the more life-threatening anaphylactic shock.

An example of another type of immune reaction, not mediated by IgE, is celiac disease. Celiac is an autoimmune condition in which the body responds to the wheat protein gluten by destroying its own villi that absorb nutrients in the small intestine. Food intolerance, on the other hand, is a broader term encompassing all adverse food reactions.

While bad reactions to food are extremely common, only a few can be defined as allergic reactions. An allergic reaction is caused by an immune system response to a specific allergen present in food, such as the proteins in cow's milk or soybeans.

"A food sensitivity or intolerance is a more generic term, comprehensive of any adverse food reaction, that can be immune-mediated but also may not be immune-mediated," Guandalini said. "For instance, some people react to the tyramine present in cheeses. This is due to release of histamine, and is not an immune process."

Lactose intolerance is another common problem caused by the inability of the body to digest lactose, a sugar present in milk. Unfortunately, this distinction makes little difference to someone suffering from any kind of food intolerance because the symptoms are often similar. The reason for the increased prevalence of food allergies and intolerances is unclear, but Guandalini says a leading theory is the "hygiene hypothesis."

Lack of early childhood exposure to infectious diseases, microorganisms and parasites as a result of industrialization, clean drinking water and modern medicine may be suppressing natural development of the immune system and increasing our susceptibility to allergies. Cathryn Nagler, Ph.D., a food allergy professor at the University of Chicago, is also studying how modern lifestyles, including high-fat diets, antibiotics and the use of baby formula instead of breastfeeding are changing the bacteria that live inside our bodies to produce more sensitivity to certain foods.

Tactics to prevent food intolerances from developing in children, - such as mothers restricting their diets during pregnancy, then breastfeeding and waiting to introduce certain foods to baby's diet - have mixed results. If allergies do develop, Guandalini says that desensitization, or controlled exposure to allergens, shows promise for helping people tolerate problem foods such as milk or peanuts, but it requires more research. Until then, the only option is avoidance, one that many people with a food intolerance figure out the hard way on their own. ===== Guandalini, S., & Newland, C. (2011).