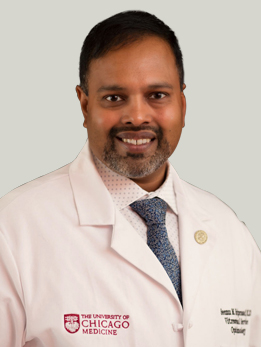 Close
773-702-3937
Request an Appointment Refer a Patient
Seenu M. Hariprasad, MD, has been named the department's first Shui-Chin Lee Professor in Ophthalmology and Visual Science and is an active leader in the department. Dr. Hariprasad is an internationally recognized vitreoretinal surgeon specializing in the diseases and surgery of the retina, vitreous, and macula.

Since joining the University of Chicago Medicine in 2005, Dr. Hariprasad has gained a reputation as a leading specialist in various vitreoretinal disorders, including AMD, diabetic eye disease, intraocular infection and RVO. He has been recognized for bringing more effective and efficient sutureless microincisional vitrectomy techniques to the medical center.

Dr. Hariprasad's clinical research has contributed to the understanding and use of new medications to combat a wide variety of vitreoretinal disorders. He has served as principal or sub-investigator in more than 45 national and international clinical trials evaluating various medications, sustained drug-delivery devices and surgical innovations to treat a variety of diseases, such as AMD, diabetic retinopathy and RVO.

His work has led to nearly 200 peer-reviewed publications, meeting abstracts and textbook chapters. He has presented more than 150 individual lectures in cities around the world. Dr. Hariprasad's recently published textbook, Management of Retinal Vein Occlusion: Current Concepts, is one of only a small number of textbooks dedicated to this disease.

He has also been awarded numerous honors, including an AAO Achievement Award and an ASRS Honor Achievement Award, and has been named a top doctor in publications such as US News & World Report and Chicago Magazine.