Learn how you can get second opinions without having to leave home.

At UChicago Medicine, pediatric neurosurgeons provide continuous care for patients with hydrocephalus as they transition from childhood to adulthood. Other members of the multispecialty team include adult and pediatric neurologists, rehabilitation specialists and primary care doctors.

Signs and symptoms of hydrocephalus vary depending on a patient's age and the underlying cause of the condition.

The situations in older children and adults described below are considered urgent and may require immediate intervention. If you or someone you know are experiencing these symptoms, please seek medical attention immediately. 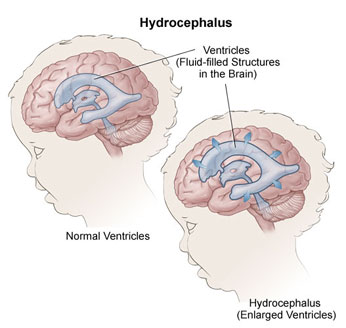 The most common type of hydrocephalus is "absorptive" hydrocephalus — defined as the inability of the brain to re-absorb the cerebrospinal fluid (CSF) that it is making. It occurs mainly from bleeding into the brain ventricles, though it also can occur after trauma or infection in the ventricles.

In many children, the bleeding occurs before birth (congenital) but it also can take place at any time up to adulthood. Bleeding associated with a brain aneurysm, or brain infections causing meningitis, can also cause this type of hydrocephalus.

Absorptive hydrocephalus is most commonly treated with a surgically implanted shunting device that carries excess spinal fluid away from the brain to an area of the body that can absorb the fluid. The shunting device — made of small silicone tubing — is often permanent and requires lifelong monitoring and maintenance. Yearly imaging of the brain and/or occasional X-rays of the device generally suffice until the patient experiences symptoms.

Hydrocephalus is referred to as "obstructive" when a tumor, cyst or other mass causes a blockage and interferes with the flow of cerebrospinal fluid. Sometimes, this obstruction has been in place for many years — possibly since birth — but does not cause symptoms until the patient reaches adulthood.

Treatment generally involves removal of the mass or placement of a shunting device to carry excess fluid out of the brain. In some cases, surgeons can create an internal bypass for excess fluid using a minimally invasive procedure called endoscopic third ventriculocisternostomy (ETV). Performed using an endoscope (a long tube with a camera lens at the tip), the surgeon makes a small opening in the floor of the third ventricle, allowing cerebrospinal fluid to be diverted from within the ventricles to an area outside of the brain.