It was the second game of a double header and freshman Brandon Kelly was 15 pitches in. The left-handed pitcher got the sign from the catcher and delivered his most effective pitch — a side arm slider.

"My elbow popped and my arm just 'fell,'" said Brandon, 14, who was pitching for a Marian Catholic High School baseball game in April when he was injured. "I was in a lot of pain. I dropped to the ground.

Although the diagnosis was a simple dislocation, Brandon continued to have pain after initial treatment. He'd have to sit on the bench for the remainder of the season. When his primary care physician suggested the young athlete consult with a sports medicine doctor, Brandon's mother, Katie Kelly, brought him to the University of Chicago Medicine.

Megan Conti Mica, MD, an orthopaedic surgeon with expertise in hand, elbow and shoulder care, told Brandon there was a silver lining to his injury.

"The biomechanics of his side arm throw would have led to a more serious problem and the need for surgery," Conti Mica said. "Brandon needed to switch to overhand pitching in order to protect the ligaments and muscles around his elbow and shoulder."

Conti Mica prescribed physical therapy to assist with range of motion and strengthening. She recommended he work with a trainer who specializes in throwing techniques. 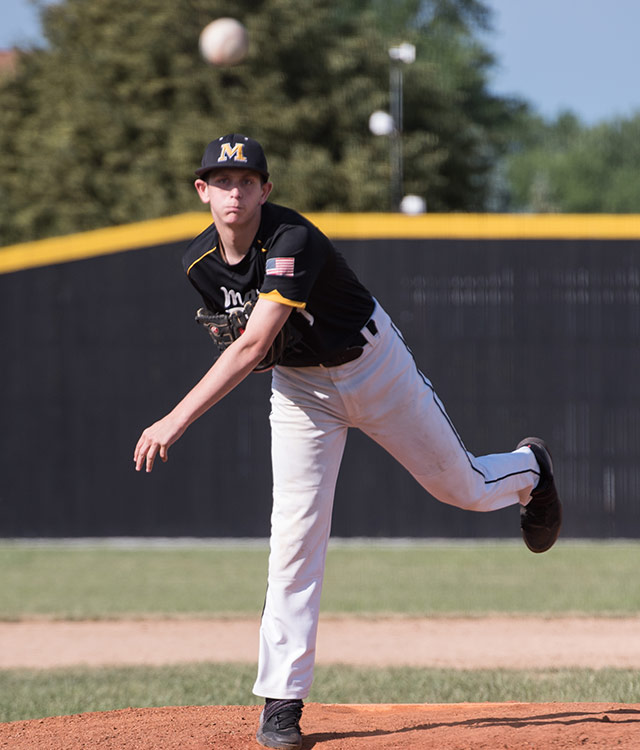 Although Brandon says throwing overhand is difficult for a left-handed pitcher, he is working with the trainer to improve his form. This spring, he began practicing his new pitching style in a non-competitive league in the south suburbs. He plans to play for a travelling baseball team over the summer.

"Dr. Conti Mica gave me life lessons about my injury," Brandon said. "She told me 'let's go forward from here.' And she gave me the confidence to do so.

"I'm trying to make baseball a career. So it's better that this happened in my freshman year than in my junior year. I have time for a fresh start."

Megan Conti Mica, MD, is a skilled hand and upper extremity surgeon. She specializes in the treatment of adults and children, including athletes at all levels, with injuries or disorders of the hand, wrist, elbow and shoulder.

The shoulder and elbow specialists at University of Chicago Medicine offer the complete range of non-surgical, minimally invasive (arthroscopic) and open surgery for teens, young adults and older adults.

Read about our shoulder care

New embolization treatment under study aims to relieve osteoarthritis knee pain
Knee replacement surgery allows chef to live pain-free
Groundbreaking new device helps correct Chicago man’s severe bow legs
How to better protect young athletes from sports injuries
Arthritis: What is it, what causes it and how to treat it?
Play it safe this summer: Help kids avoid sprains, fractures and other injuries
UChicago Medicine, WNBA Chicago Sky renew partnership agreement
What are the signs of arthritis in the hands?
What is a ganglion cyst? And other common questions