This is a story of a real life superhero, Eric DelaTorre, who was born with life-threatening heart defects. Today, the 5-year-old boy has the powers he needs to live a healthy and energetic life.

At the time of Eric’s birth in October 2011, an echocardiogram showed a serious heart condition. Cardiologists at two hospitals had differing opinions about which side of the heart had the more critical problem. That’s when Eric’s family turned to the University of Chicago Medicine Comer Children’s Hospital, where a comprehensive echocardiogram showed the infant had complex congenital heart disease significantly affecting both sides of his heart.

“For the first time, we felt like more than just a number,” said Eric’s mother Alma. “We loved the hospital’s boutique feel and personal touches, like the echo technician stroking Eric’s head and the cardiologist playing classical music during the test.” 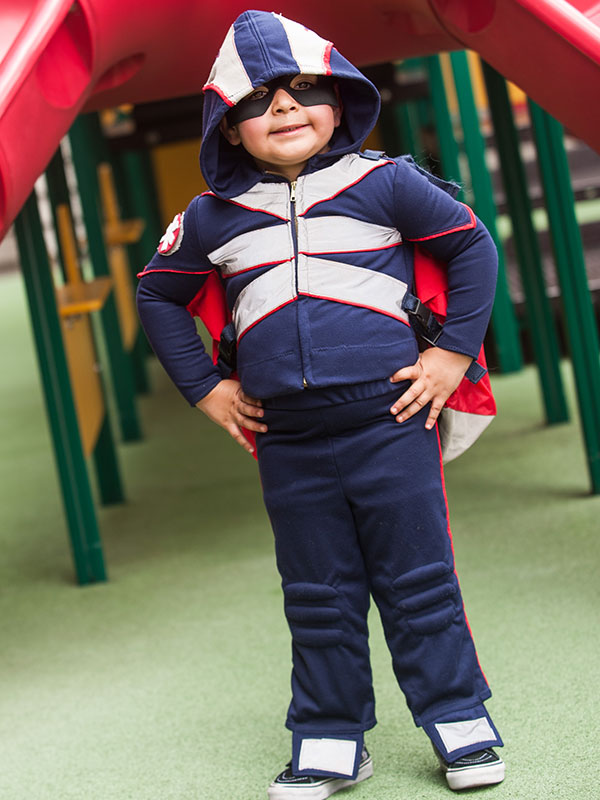 When Eric was just three months old, Gerhard Ziemer, MD, PhD, performed open-heart surgery on the left side of his heart. Due to the severity of the condition, the little boy’s chest needed to be left open for three days with a life support machine at his bedside.

“Our world came crashing down when we were told Eric might not pull through,” Alma said. “Our PICU nurses assured us everything was going to be okay and never left his side. Child Life specialists also comforted and helped us.”

Eric recovered and grew stronger. And he was able to go home from the hospital seven weeks later.

But when the pulmonary arteries on the right side of his heart failed to grow as expected, another open-heart surgery followed just over a year after the first one. The main pulmonary artery was widened and the entire pulmonary artery between his right and left lungs was replaced with artificial tubes.

"We were included in rounds and Dr. Ziemer spent hours answering our questions,” Alma said. “Everyone — from the valets and receptionists to the cleaning people — was so nice and warm to us.”

The Power of X-ray Vision 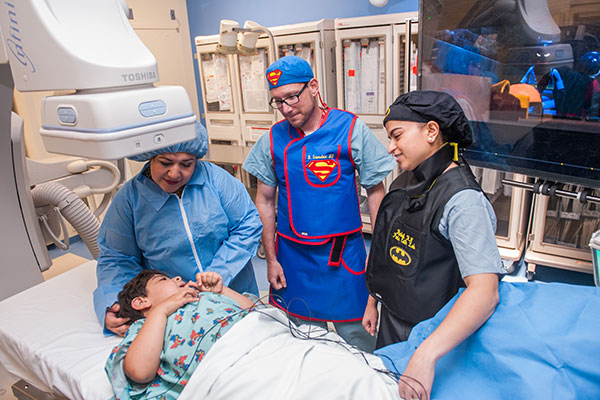 Reconstructing the heart of a growing superhero is no easy feat, and the cardiac team continued to follow Eric closely to ensure he didn’t miss a beat.

In December 2015, Comer Children’s interventional cardiologist, Daniel H. Gruenstein, MD, used Eric’s love of superheroes to ease his patient’s fears. When Eric avoided making eye contact with his new doctor, the nurses suggested wearing superhero lead aprons and matching surgical caps during a procedure. As soon as Gruenstein donned his Superman gear, “Eric and I were best friends,” he said adding, “We also played superhero cartoons on a monitor to make him more comfortable.”

“Eric wants to participate in everything,” Alma said. “None of this would be possible without the staff at Comer Children’s Hospital, who gave our family all the attention and love we needed. It was the right decision to come to Comer Children’s.”

Eric’s procedures took place in Comer Children’s Hybrid Cardiac Catheterization Lab, a state-of-the-art facility for treating children and adults with heart conditions. The cardiovascular x-ray system in the lab gives the physicians real-time feedback on radiation dosage so they can make adjustments while doing procedures. The only one of its kind in Chicago, the system also enables the interventional cardiologist to focus the radiation on a small region of the patient’s body, further reducing the exposure for patients like Eric who may require several catheterizations throughout their lifetime.

“Superheroes use X-ray vision to save people, and we use it to help keep the hearts of little superheroes pumping,” Gruenstein said. “At the same time, we are protecting their bodies from excess radiation over the long term.”

Today, Eric is an energetic and outgoing little boy. His family spends a lot of time outdoors, where Eric loves to roll in the dirt, hunt fossils and observe nature. He also loves playing with robots and building things.

“Eric wants to participate in everything,” Alma said. “None of this would be possible without the staff at Comer Children’s Hospital, who gave our family all the attention and love we needed. It was the right decision to come to Comer Children’s.”

The pediatric cardiology team at the University of Chicago Medicine Comer Children's Hospital brings patients the latest in heart research and treatments while delivering personalized, compassionate care to each family.