She was having surgery frequently. I mean, she would have surgery every 2 to 10 weeks. And that went on for five years.

Her airway would go from being clear after surgery and then within a matter of weeks, it could be 90% obstructed. And it was hard for her. I mean, it was hard to be around other kids, and they could never understand her, and she would feel like she couldn't get her point across so she just wouldn't talk.

Clearly, as otolaryngologist, this is not my expertise to inject Avastin into somebody's circulation. That's beyond my scope of practice. So we reach out to our colleagues, and in this situation, I reached to Dr. Applebaum who is a hematology-oncology professional and uses Avastin for other disease entities.

Avastin, or as we often call it bevacizumab, is a monoclonal antibody that's designed to specifically target a certain gene called basal endothelial growth factor alpha. And the reason this was developed is that VEGF is actually one of the key drivers of blood vessel formation. And the thought behind that was as an oncologist, if you use a VEGF inhibitor to target blood vessel formation with the cancer, and just think about it, as a cancer grows, it needs to form new blood vessels so it has oxygen, so it can get nutrients and keep growing. If you choke off that blood supply with a VEGF inhibitor like bevacizumab or Avastin, then the tumor doesn't get its nutrients, the tumor can't grow, and ultimately, the tumor will regress and hopefully die and go away.

I looked at Eden when she first came and she had a bunch of papillomas over her legs in the operating room. And then after she received her first one or two injections I believe, we looked again but there were absolutely no papillomas, which was incredible. That was very, very cool to see.

I didn't know her before but just looking through her and meeting her family and talking with Eden and being able to provide this drug, which from the point of view of an oncologist is a very safe drug and very well tolerated drug and have it make such a profound impact on her life, that's been incredibly rewarding.

You are so brave.

Being able to get a break from those surgeries has given her a chance of a normal life, and she can feel like a normal first grader. She is incredibly happy and fun and loving, and I feel like she just has this new zest for life. She is doing fantastic. We have no surgery scheduled, which is amazing. She hasn't had one in almost a year, and it's just like a whole new life.

An off-label cancer drug has shown dramatic and life-changing results for a young girl from Chicago’s South suburbs with the rare disease, recurrent respiratory papillomatosis (RRP).

Eden Tansey, 7, of Frankfort, is only the second child in the Chicago area to receive systemic bevacizumab to treat RRP. The drug is prescribed under the brand names Avastin, Mvasi or Zirabev.

RRP causes fast-growing tumors in the respiratory tract that impede talking and breathing. The benign growths can spread to the lungs and become cancerous. Patients need multiple surgeries to remove the tumors, which regrow in a matter of weeks or months. Eden had 32 surgeries in five years to remove tumors, sometimes as frequently as every two weeks. At times, her airway was 90% blocked. 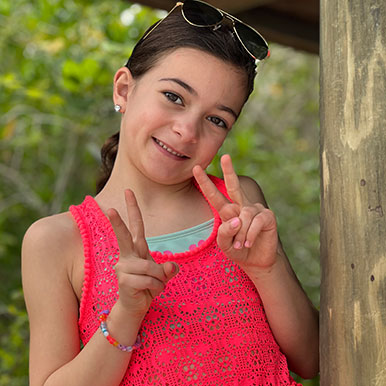 Since there is no cure or FDA-approved treatment for RRP, Eden’s mother, Lisa Tansey, sought out treatments at five different hospitals. Eden endured multiple surgeries involving injections into her vocal cords and also tried countless supplements, dietary changes and alternative treatments. Nothing worked.

In early 2021, Lisa saw a Facebook post in a national RRP group about Fuad Baroody, MD, a leading otolaryngologist and head and neck surgeon at the University of Chicago Medicine Comer Children’s Hospital. The post hailed his expertise in RRP research and treatment, including the positive results he was having with a novel, systemic bevacizumab therapy on a pediatric RRP patient who was just a little older than Eden.

Eden was being treated for RRP at a different Chicago hospital at the time, but Lisa reached out to Baroody and his colleague, pediatric oncologist Mark A. Applebaum, MD, to discuss using systemic bevacizumab to help Eden.

The drug bevacizumab chokes off the blood supply to tumors, causing them to shrink and eventually disappear, Applebaum explained. Used for many kinds of cancers and pediatric brain tumors, it’s easily tolerated with few side effects. Baroody had studied data and reports about bevacizumab’s impact on RRP tumors and concluded that it would be a safe, outside-the-box treatment for Eden.

Starting in February 2021, Eden began having bevacizumab administered intravenously every three weeks at Comer Children’s Hospital. Three months later, her respiratory tract was scoped. To everyone’s surprise and delight, it was tumor-free. And there haven’t been any tumors or surgeries since.

Now there’s hope to slow the disease down in patients who get very frequent occurrences.

The drug is working so well, in fact, that Eden’s every-three-week infusions have gradually decreased to every 12 weeks. Another one of Baroody’s RRP patients is doing so well, he needs just three doses of systemic bevacizumab yearly.

Despite the success in these two cases, Baroody cautions that many questions remain about systemic bevacizumab's affect on RRP, including the length of its efficacy and whether it will cause long-term side effects. It’s not currently an FDA-approved treatment for RRP. Baroody only recommends it to patients who have tried all the other treatment options.

“It’s very, very early and there have been no clinical trials and no precedent, but so far, it’s been incredible,” Baroody said. “I’ve seen kids thrive with this drug and without any major side effects so far. Now there’s hope to slow the disease down in patients who get very frequent occurrences.”

Bevacizumab has been life-changing for Eden and her family. Before this treatment, Eden struggled to speak louder than a scratchy whisper and had to sit out many activities because breathing was too difficult. She faced regular trips to the hospital for taxing surgeries, each one adding scar tissue buildup in her airway.

“Our lives are night-and-day different now,” said Lisa, a former UChicago Medicine physical therapist. “The bevacizumab has provided Eden a desperately needed break from the operating room. It’s allowed her voice to return and has given her the ability to be a happy, carefree and silly first grader. She has a new lease on life.”

There are only about 20,000 cases of RRP in the U.S. The condition is caused by the HPV virus, which is the leading cause of cervical cancer and also factors into other cancers. About 80% of the population is exposed to HPV before age of 45, but most adults and children never know they're infected and their immune system is able to clear the virus naturally. Researchers are still trying to understand why some children are able to clear the HPV virus, while others are not and present with RRP.

Lisa Tansey now serves on the board of the RPP Foundation (where Eden was recently featured in a video), advocating for more attention, funding and research about this disease.

The studies are so encouraging. We’re on the right path.

“Systemic bevacizumab is amazing for Eden’s RRP, and it’s given us such a reprieve, but it’s not a cure. My ultimate goal is to find a cure for RRP, but in the meantime, I want to spread awareness of systemic bevacizumab in hopes it can provide help and hope to others suffering from constant cycles of repetitive surgeries,” Lisa said.

RRP Foundation President Kim McClellan, a juvenile-onset adult RRP patient being treated with systemic bevacizumab, said doctors nationwide are seeing a “miraculous” response to this drug. As the foundation works to raise awareness about the disease and raise money for research, McClellan and Baroody encourage people to get the HPV vaccine, which has greatly lowered new cases of juvenile-onset RRP and protects against HPV-related cancers, especially cervical cancer.

“If systemic bevacizumab takes a patient from having surgery every two weeks to having an infusion every 12 weeks, then it’s giving that patient their quality of life back while our researchers work toward a vaccine or treatment,” said McClellan, who has undergone more than 250 procedures during her lifetime for RRP and uses a tracheostomy valve to speak. “The studies are so encouraging. We’re on the right path.”

Mark Applebaum, MD, is an expert in pediatric cancers and blood diseases. He has a special interest in the treatment of neuroblastoma, sarcomas and solid tumors.

Jamie Bartosch is a Senior Communications Specialist at the University of Chicago Medicine.

UChicago Medicine breaks ground on $121M multispecialty care facility in Crown Point, Indiana
How to better protect young athletes from sports injuries
COVID-19 vaccine and kids: What parents should know
Is your child meeting their developmental milestones?
Comer Children's again listed among top hospitals in U.S. News & World Report 2022-23 rankings
Talking tablet improves communication and behavior for 6-year-old with apraxia and developmental delay
College student celebrates being cancer-free for more than a decade after battling acute lymphoblastic leukemia as a tween
Ready for pollen season? How to deal with spring and summer allergies
What families need to know about managing a child's celiac disease