Melissa Gilliam, MD, MPH, is the Ellen H. Block Professor in Health Justice in the Departments of Obstetrics and Gynecology and Pediatrics, chief of the Section of Family Planning and Contraceptive Research, and dean for diversity and inclusion in the Biological Sciences Division. (Robert Kozloff/The University of Chicago)
Melissa Gilliam, MD, MPH, first started to see the bigger ecosystem of teen pregnancy during a study on ways to reduce the number of teens who become pregnant again within a year of delivery. At the time a resident in obstetrics and gynecology at Northwestern Memorial Hospital, she worked on a small trial testing an intervention to remind teenage African American mothers to take their birth control pills.


"I followed the girls longitudinally and learned very quickly that their social needs, like paying their electric bill, finding child care, attending school and finding transportation proved more powerful than the intervention and made contraceptive use really difficult," said Gilliam, chief of family planning and contraceptive research at the University of Chicago Medicine.

A later five-year study, which involved interviewing postpartum adolescent mothers in their homes over two years, highlighted other issues - such as difficulty getting medical appointments, misinformation and ignored requests for birth control - within this vulnerable population. The result: greater susceptibility to repeat pregnancies.

"Health care is a big and complex system and adolescents often get lost in it," said Gilliam. "Often clinicians are not aware of the daily life experience of a teenage mother. We are trained to administer medications but not how to integrate adherence into an adolescent mother's complicated life."

As head of the Center for Interdisciplinary Inquiry and Innovation in Sexual and Reproductive Health (Ci3) at the University of Chicago, Gilliam is pioneering new ways to engage and empower teens.

It starts with changing how research is done. "How we ask questions about young people of color and the way we formulate our hypotheses are often based more on stereotypes or what we hear in the media than on what young people actually feel about themselves and their true lives," she said. "If an intervention is to be meaningful and to stick, then we need to think about interventions in a different way."

Ci3 contains internal labs - one for game design, another for storytelling and a new one that will use design thinking, a method for engaging communities in problem-solving. The most established of the three is the Game Changer Chicago (GCC) Design Lab, a multidisciplinary Ci3 initiative that brings teens directly into the research process, amplifying voices often unheard. Funded by grants from the National Institutes of Health and the John D. and Catherine T. MacArthur Foundation and the Neubauer Collegium for Culture and Society, the program uses innovative gameplay and game design to engage youth on issues of sexual health, civic engagement and college readiness.

"Melissa and I started Game Changer based on the conviction that the quality of sex education is uneven and limited in the United States," said GCC co-founder and media studies specialist Patrick Jagoda, PhD, assistant professor in the Department of English Language and Literature at the University of Chicago. Rather than just giving teens information about contraception and STIs, GCC uses digital storytelling and game design to empower them.

Ci3 also uses storytelling to engage more deeply with young people. With support from the Ford Foundation, members of Ci3 collaborate with community-based organizations and South Side teens to explore such issues as race, gender, sexual identity and living in segregated communities. Students are taught skills in storytelling, photography and video and sound editing.

These experiences with storytelling have led to Ci3 developing the Transmedia Story Lab (TSL), devoted to telling stories across different forms of media. "Storytelling is very powerful with implications for the listener and the storyteller," Gilliam said. "There is a long tradition of narrative as therapy - taking an experience that seems overwhelming and making it manageable through narration and writing."

Doing so can also improve one's self-concept, particularly for adolescents who struggle in school. "Often young people are viewed through a very narrow academic lens, which may lead them to see themselves as failures," Gilliam said. At Ci3, "whether it's telling a story or designing a game, the idea is to start thinking about how there are many literacies and ways to learn and interact with the world."

For teens from socially and economically segregated communities, building new skills and having the opportunity to share their stories can be transformative. "We know that continuous exposure to uncertainty or insecurity as a result of social factors impacts health and resilience," Jagoda explained. "Melissa is trying to make well-researched and creative interventions to counteract those forces."

"It's not just looking at the public health outcomes like rate of teen pregnancy or sexual violence," Gilliam added, "but also the larger community contexts, and the social and political structures that facilitate or inhibit the health of young people."

Her methods are shedding important light on barriers to sexual health as well as fueling promising solutions. One example is GCC's "Bystander," a short video game and curriculum developed with support of the Hive Learning Network. "Bystander" aims to change the culture around sexual misconduct. It teaches high school students effective bystander techniques to prevent gendered language and help prevent sexual harassment and assault. Through a series of interactive scenarios, players learn about sexual violence, are disabused of rape myths and learn what to do if they're in a situation where sexual violence might occur. An accompanying curriculum helps teachers discuss these issues with their students and identify resources for those who have experienced sexual violence.

GCC plans to roll out "Bystander" first in the Chicago Public Schools and eventually across the nation. "Our goal is not just to design interventions but also get them out into the world," said Gilliam, who has partnered with the University's Chicago Innovation Exchange and UChicago Tech to distribute the game. She and Jagoda are also launching a start-up focused on helping academic institutions "put our tools, resources and curriculum in the hands of as many people as can benefit." 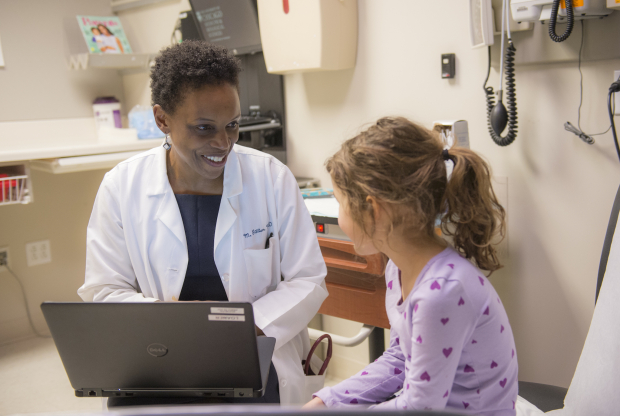 Empowering others is key for Gilliam, not only as a researcher but also as dean for diversity and inclusion in the Biological Sciences Division. "We're more creative and dynamic if we are more inclusive and diverse," she said. "That's the general philosophy that goes into all of my work." Ashlyn Sparrow, GCC lab director, echoes how important - and rare - it is to have a research community as diverse as the individuals it studies. "Personally, I've had very few female role models in STEM," she said. "To work under another woman of color who is also one of the top doctors in her field is amazing."

To encourage diverse individuals within the BSD to be active, engaged members, Gilliam and her colleagues are looking closely at existing systems, structures and policies. "We are trying to catalyze, organize and be very strategic," she said. "There are often people excluded from conversations, from tables, from activities, and it is to everyone's detriment."

Teaching individuals the skills to work cross-culturally is one way to help change the situation. Whether across racial, ethnic, religious or other dimensions of diversity, Gilliam said, "we have to create an environment where we can interact." Monthly dialogues around diversity, training sessions and a film series are a few of the efforts she's helped put in place. Ensuring equitable patient outcomes and cultivating a diverse workforce through recruitment and leadership training are also critical tasks for the Office of Diversity and Inclusion.

"The idea is to empower us as an institution to do our work, whether we're talking about students, faculty, staff or patients," Gilliam said. It's a goal that aligns perfectly with her research.

"Melissa is a network builder," Jagoda said. "She realizes that health issues, because they're systemic, require a well-organized coalition of researchers and makers who seek to create change together."

This potential drives Gilliam. "The social problems are complicated, but there is a tremendous amount of hope and forward thinking," she said. "The ability of an academic institution to make transformative change in communities is unprecedented."

Regina Dixon-Reeves, PhD, executive director of the Office of Diversity and Inclusion, said Gilliam's strength lies in her ability to envision strategic changes and to orchestrate their implementation using innovation and a diverse team of committed constituents. Said Dixon-Reeves: "She fosters hope by empowering others to be part of creating solutions unique to their environment."

This article is part of a five-part series originally published in the Spring 2016 issue of Medicine on the Midway.

What is pediatric eczema, and when should we see a doctor?
Neurosurgery team performs laser hemispherectomy on child with epilepsy
University of Chicago Medicine joins Family Connects Chicago
How to help young people stay connected
Protecting children at risk during the pandemic
Should we go to the emergency room, urgent care or pediatrician?
Stem cell transplant team looks inward to improve survival rates for patients
COVID-19 and kids: What parents should know about the vaccine
Dameka Edwards-Hart: ‘I can make a difference.’