It wasn’t easy for Sherry Kedra to read the words on her computer screen. She had recently lost 30 percent of her vision and a throbbing in her head, which started “as the worst headache of my life,” still lingered. However, the 37-year-old nurse, wife and mother of two boys stayed by her computer for several hours. She was determined to learn more about the blood vessel that had bled into her brain a week earlier.

“I was frantic,” said Kedra, who is from Akron, Ohio. “My local neurosurgeon told me I had multiple vascular malformations in my brain and one had leaked. He said it would heal and called it ‘no big deal.’" Worried there was more to her diagnosis, she went home and searched online for more information.

Landing on the website of Angioma Alliance, an online support group for patients with a cerebral cavernous malformation (referred to as CCM and also known as cavernous angioma), Kedra found answers. After watching a video presentation on CCM by University of Chicago Medicine neurovascular surgeon, Issam Awad, MD, she jotted down his name and number. Awad and Kedra discussed her condition over the phone. Not long after, Kedra told her husband, Steven, “We’re going to Chicago.”

“I knew if I had another bleed and needed brain surgery, I would come back to Dr. Awad.”

In the fall of 2010, Awad, an internationally known expert on CCM, met with the Kedras. He described cerebral cavernous malformations as abnormally enlarged blood vessels clustered together in bubble-like structures that resemble raspberries. If the blood vessel walls stretch and become brittle, they can leak or bleed into the brain causing headaches, visual or hearing difficulties, weakness in the arms and legs, seizures, and hemorrhages.

Awad agreed that Kedra's current lesion would heal but recommended the other malformations in her brain be watched and offered to monitor them long distance. He also informed Kedra that a genetic mutation likely caused her illness and her children had a 50 percent chance of inheriting the condition.

"I left Chicago feeling empowered because I had the information I was looking for," Kedra said of her appointment. “I knew if I had another bleed and needed brain surgery, I would come back to Dr. Awad.”

Surgery Returns Feeling and Function to Patient's Hand and Fingers

In mid-December 2011, just over a year after her initial meeting with Awad, Kedra woke up with no feeling in her left pinky finger. During the next five hours, first her hand and then her entire left forearm became paralyzed. A scan in an Akron hospital revealed a bleed in Kedra's brain and neurosurgeons there recommended surgery. She contacted Awad and headed to Chicago.

At the beginning of the operation, Awad made a silver dollar-size opening in Kedra's skull. With the assistance of an expert neurophysiology team, he mapped the region around the dangerous lesion to identify the areas that controlled sensory and motor function of Kedra’s hand. In a four-hour procedure, he and his surgical team completely removed the CCM.

In another part of the hospital, physicians in the Neurosciences Critical Care Unit planned and prepared for Kedra's post-surgical management. Care in the Neuro-ICU involves a seamless interaction among a multidisciplinary group of physicians and nurses skilled in taking care of the whole person. The neurocritical care team was able to discharge her from the unit in just one day.

While at the medical center for surgery, Kedra also had a consultation with Darrel Waggoner, MD, medical director for human genetics. "Genetic testing clearly identifies who is at risk for the condition," Waggoner said. "It can give a family the knowledge they need to plan monitoring and intervention strategies now and for future generations." Kedra tested positive for a gene called CCM1. Later, genetic testing on her sons would show that 11-year-old Ross had inherited the mutation.

Today, although Kedra has decreased sensation in a few fingers, she has regained full movement in her arm, hand and fingers. Recently, she returned to Chicago for special MRI studies (being developed at the University of Chicago Medicine), which provided optimized information about her remaining CCM lesions. At the same time, Awad's team performed a baseline MRI on Ross. Awad will continue to monitor Kedra and Ross for years to come.

When Awad first took a special interest in CCMs 30 years ago, they were so poorly understood that they were called "cryptic malformations." Patients harboring these mysterious brain lesions were often misdiagnosed with multiple sclerosis or epilepsy. Many suffered a debilitating stroke or other long-term effects.

The advent of magnetic resonance imaging in the early 1980s enabled Awad and others studying the condition to see the lesions in patients' brains for the first time. Pathological studies followed and by the early 1990s scientists had classified and defined the disease. In the ensuing decades, advances in MRI technology -- including gradient echo and susceptibility weighted imaging -- offered more precise pictures of the malformations, their location and prevalence. Over the same period, researchers working with Awad discovered the mutations in three genes (named CCM 1, 2 and 3) that drive lesion development in one-third of CCM cases.

Investigators are now working to identify biomarkers of the disease and on creating drugs that halt lesion development. In a recent study, published in the medical journal Stroke, Awad and his colleagues demonstrated that the medication fasudil prevented the formation of CCM lesions in a laboratory model of the disease.

"The results were very dramatic," Awad reported. "The number of lesions went down and the ones that developed were smaller and did not show any inflammation and bleeding." The researchers hope results from further testing will soon lead to clinical trials for patients.

"The knowledge on CCM is not complete, but we are doing everything -- surgery, imaging and genetic screening -- better," Awad said. "I hope the research being done now will bring about a cure in Ross’s lifetime.”

While visiting Chicago for Sherry and Ross's follow-up care, the Kedra family stayed at the Ronald McDonald House near the University of Chicago Medicine Comer Children's Hospital.

Because of Dr. Awad's skill in removing the CCM, Mrs. Kedra's brain and body responded without complexity.

While at the medical center for surgery, Kedra also had a consultation with Darrel Waggoner, MD, medical director for human genetics. "Genetic testing clearly identifies who is at risk for the condition," Waggoner said. "It can give a family the knowledge they need to plan monitoring and intervention strategies now and for future generations." Kedra tested positive for a gene called CCM1. Later, genetic testing on her sons would show that 11-year-old Ross had inherited the mutation. 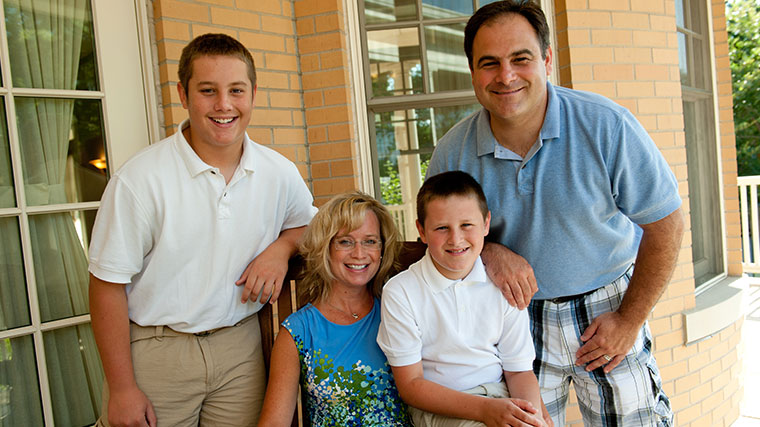 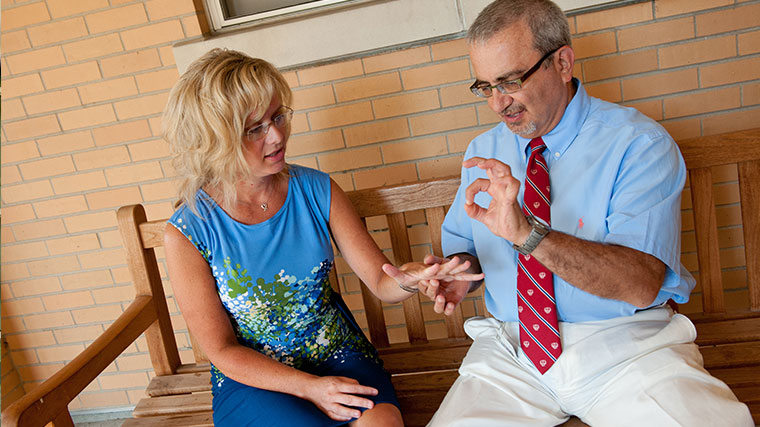 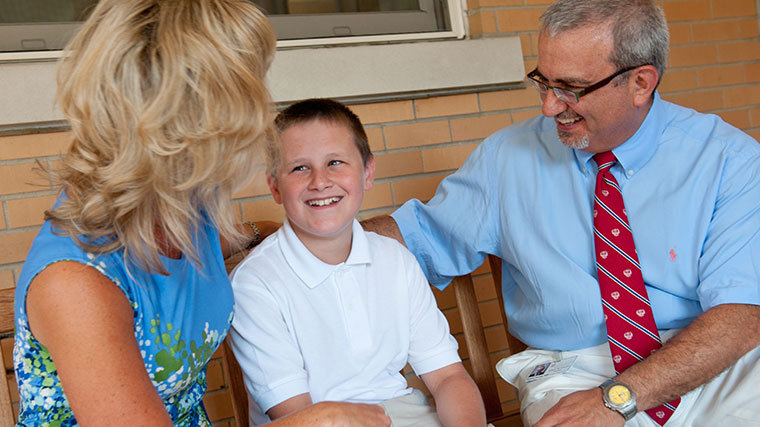 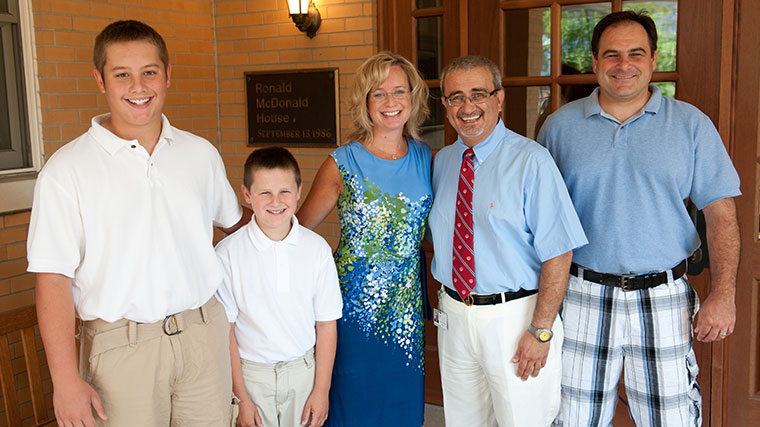 Just a few weeks after surgery, Sherry Kedra took a moment during an occupational therapy session to record this thank you video for Awad.

Watch Video Watch Video With Transcript
Close Video
Hi Dr. Awad. I'm in therapy doing OT. We are 4 and 1/2 weeks out from surgery, and I wanted to send you a little video of me moving my hands since the CCM resection. So I have full movement, just some tingling and numbness in my pinky and ring finger. So here I am picking up buttons. I can touch each fingertip with my thumb. Full movement. So I'm getting stronger and stronger, and it's because of you. Thank you. Have a great day.