Viruses can infect every kind of life form, from humans all the way down to bacteria. They've managed to spread so far and wide because they have tricks for getting inside cells and multiplying. Some viruses can insert genetic material into their hosts, taking over the machinery of its cells to reproduce. Others lay dormant inside a cell for years until some event triggers them to wake up and burst out of the cell to attack others. 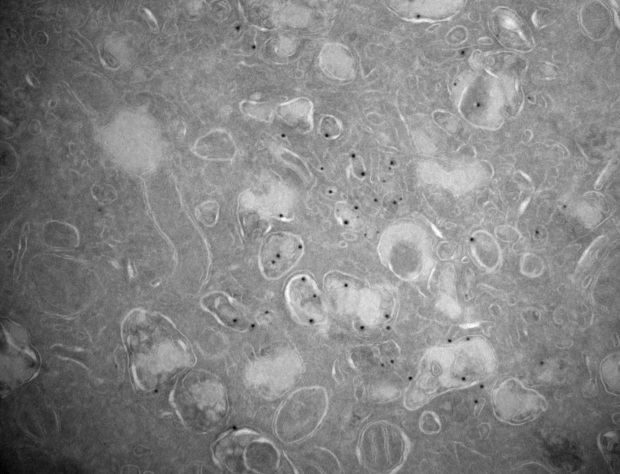 One group of viruses, called positive-sense, single-stranded RNA (+RNA) viruses, plays a game of hide and seek to infect a host. Positive-sense, single-stranded RNA viruses have a single strand of RNA that can act like messenger RNA that tells the host cell what proteins make so it can survive. This group accounts for about one-third of all known viruses, including some of the most well-known, disease-causing viruses out there: hepatitis C, West Nile, dengue, Zika and rhinoviruses that cause the common cold.

Just like a household, cells regularly produce trash that needs to be thrown out or recycled.

When a +RNA virus gets inside a cell, it manipulates the membrane of the cell to create a little compartment, called a replication complex. This compartment helps it hide from the immune system so it can replicate and move on to infect other cells.

Seungmin Hwang, PhD, an assistant professor of pathology at the University of Chicago, studies another common +RNA virus, norovirus. Norovirus is a major cause of what we call “stomach flu” or food poisoning. In 2012, while working as a postdoc with the mouse version of norovirus, Hwang discovered that the immune system can detect the replication complex where viruses are hiding inside the cell membrane and attack it. Subsequently, when studying other +RNA viruses, he saw the same thing.

In a paper published in the journal Cell Host & Microbe, Hwang and his team unravel a little bit more of the mystery about how the immune system can “see” these replication complexes. Just like a household, cells regularly produce trash that needs to be thrown out or recycled. They use a process called autophagy to identify broken down components and unused proteins and wrap them up for disposal. Cells use autophagy proteins to wrap the trash in a membrane-like structure and mark it with another autophagy protein so the cell knows to dispose of it.

Hwang and his team found that cells use the same autophagy proteins to flag replication complexes where viruses are hiding so the immune system can target them. It's like marking some trash for regular recycling, and some of it as hazardous materials for special processing. The researchers found that this same process works in other +RNA viruses, too.

Learning more about how the immune system identifies certain types of viruses could be a big help to researchers developing anti-viral treatments. What's more intriguing, Hwang says, is that other pathogens that aren't viruses, like the parasite that causes toxoplasmosis and the bacteria that causes tuberculosis, also build compartments inside cells to hide from the immune system. If scientists can figure out how to target +RNA viruses, it may lead to new ways to fight these diseases.