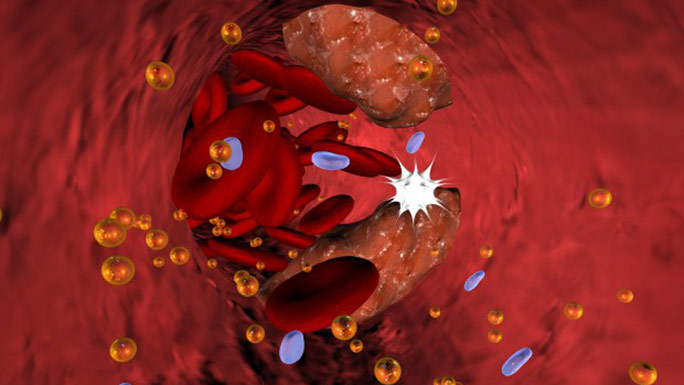 Atherosclerosis causes plaque made up of fat, cholesterol, calcium and other substances in the blood to build up in the arteries, harden, and limit blood flow.

A study based on medical records from more than a quarter million adult patients found that African-American patients with connective tissue diseases such as lupus or rheumatoid arthritis were twice as likely as white patients to suffer from narrowed or atherosclerotic blood vessels, which increase the risk of a heart attack, stroke or death. The study, published Feb. 4, 2016, in the open access Nature journal, Scientific Reports, also showed that the prevalence of narrowed blood vessels in patients with connective tissues disease (CTD) was particularly high in young African-Americans.

"These findings raise new questions about the links between inflammation, connective tissue diseases and atherosclerotic cardiovascular disease," said study author Francis Alenghat, MD, PhD, assistant professor of medicine in the section of cardiology at the University of Chicago. "They point to differences in heart disease risk tied to systemic inflammation and modified by race and age."

Prior to this study there was "a dearth of formal understanding on interactions of race with connective tissue diseases in determining cardiovascular risk," Alenghat said. Previous studies focused on less diverse populations. In order to understand these interactions, Alenghat turned to "the large, diverse patient population seen here at the University of Chicago" to provide insights.

Alenghat queried de-identified charts from more than 287,000 African-American and Caucasian patients treated at the University's medical center. He found 10 percent of the African-American patients suffered from atherosclerotic cardiovascular disease-defined as a heart attack, ischemic heart disease, angina, coronary artery disease or atherosclerotic disease of any artery. The prevalence was slightly lower, 8.4 percent, in Caucasians.

African Americans with CTD also developed cardiovascular disease sooner. In the study, more than nine percent of young African-American adults aged 18 to 44 with CTD had received a diagnosis of atherosclerosis. They were 4.7 times more likely to have atherosclerosis than Caucasians of the same age with CTD.

The association of CTD with atherosclerotic cardiovascular disease "was more prominent in African-Americans and in the young," he said.

African-Americans were also more likely than whites to have traditional risk factors for cardiovascular disease, with significantly higher levels of diabetes, smoking and hypertension.

"The molecular and cellular causes of each connective tissue disease are distinct," Alenghat said. "But they all involve systemic inflammation." The data from this study suggest "we should consider lower thresholds for primary prevention in many patients with CTD," he added.

Still, Alenghat, a preventive cardiologist interested in the intersection of inflammation and cardiovascular disease, stressed there are several limitations to this study. It was retrospective. It relied on rigid diagnostic codes for complex multi-faceted diseases as well as simplified classifications of race. And it was designed to detect correlations, rather than determine causal relationships.

Nonetheless, "the findings show that CTD is associated with higher prevalence of atherosclerotic cardiovascular disease, an association that is accentuated in African-Americans and in young adults," Alenghat said. "These insights could be used to improve how we evaluate many patients with a wide range of connective tissue diseases."

They also support the importance of controlling inflammation and identifying and addressing traditional cardiovascular risks factors.

"If we were to view the current findings on the backdrop of contemporary cardiovascular risk calculators and statin guidelines, many patients with connective tissue disease could reasonably consider moderate-intensity statin therapy at age 35," he said.