New research shows that healthy infants have intestinal bacteria that prevent the development of food allergies.

Researchers from the University of Chicago, Argonne National Laboratory and the University of Naples Federico II in Italy found that when gut microbes from healthy human infants were transplanted into germ-free mice, the animals were protected from an allergic reaction when exposed to cow’s milk. Gut microbes from infants allergic to milk did not offer the same protection; mice receiving these bacteria suffered an allergic reaction when given cow’s milk. Cow’s milk allergy is the most common food allergy affecting children.

The study, published this week in Nature Medicine, also identifies a specific bacterial species that protects against allergic responses to food. “This study allows us to define a causal relationship and shows that the microbiota itself can dictate whether or not you get an allergic response” said Cathryn Nagler, PhD, the Bunning Food Allergy Professor at UChicago and senior author of the study. 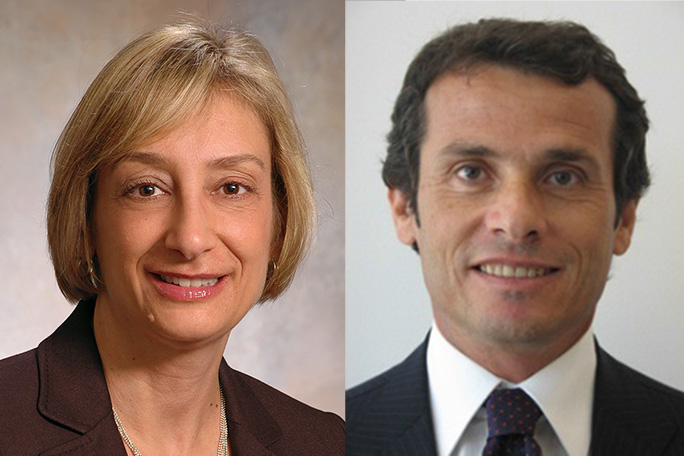 The research, funded in part by the National Institute of Allergy and Infectious Diseases, is the result of a long collaboration between Nagler and Roberto Berni Canani, MD, PhD, chief of the Pediatric Allergy Program and CEINGE Advanced Biotechnologies at the University Federico II of Naples, Italy. In 2015,the two worked together on a project that found significant differences in the gut microbiomes of healthy infants and those with cow’s milk allergy. That eventually led them to ask if those differences somehow contributed to the development of the allergy.

The researchers transplanted gut microbes from each of eight infant donors—four healthy and four with cow’s milk allergy—into groups of mice via fecal samples. The mice had been raised in a completely sterile, germ-free environment, meaning they had no bacteria of their own. The mice were fed the same formula as the infants to help the bacteria colonize properly by providing the same sources of nutrients.

“These findings demonstrate the critical role of the gut microbiota in the development of food allergy and strongly suggest that modulating bacterial communities is relevant to stopping the food allergy disease burden,” Canani said. “These data are paving the way for innovative interventions for the prevention and treatment of food allergy that are under evaluation at our centers.” 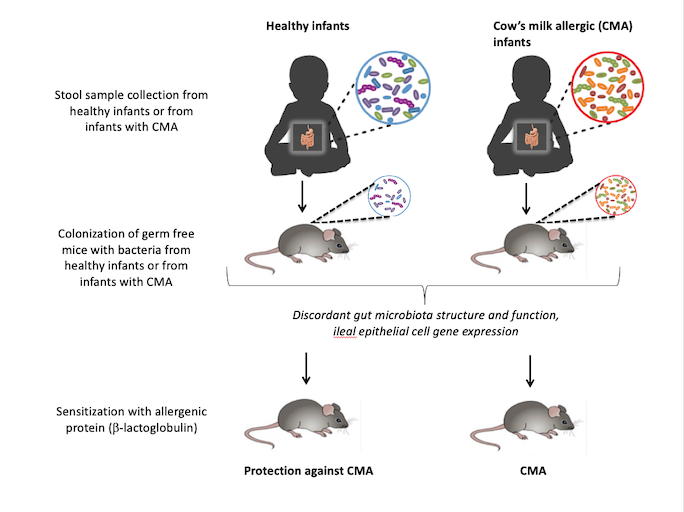 The researchers also studied the composition of microbes in the intestinal tract of the mice and analyzed differences in gene expression between the healthy and allergic groups. This allowed them to pinpoint a particular species, Anaerostipes caccae, that appears to protect against allergic reactions when it is present in the gut.

A.caccaeis part of a class of bacteria, Clostridia, that Nagler and her colleagues identified in a 2014 study that protects against nut allergies. These bacteria produce butyrate, a short-chain fatty acid that previous research has shown is a crucial nutrient for establishing a healthy microbial community in the gut. This suggests that this class of butyrate-producing bacteria provides more general protection against other common food allergies as well. These bacteria or their metabolites could be used as part of biotherapeutic drugs to prevent or reverse other common food allergies.

“What we see with this work again is how, in the context of all of the different types of microorganisms inhabiting the gastrointestinal tract, one single organism can have such a profound effect on how the host is affected by dietary components,” said Dionysios Antonopoulos, PhD, microbial systems biologist at Argonne, assistant professor of Medicine at UChicago and a co-author of the study. “We also get a new appreciation for the distinct roles that each of these members play beyond the generalization that the ‘microbiome’ is involved.”

The findings from this study are already helping scientists create new kinds of treatments for food allergies. Nagler is the president and co-founder of ClostraBio, a startup company that is developing biotherapeutics based on synthetic microbial metabolites. With the help of UChicago’s Polsky Center for Entrepreneurship and Innovation, ClostraBio recently raised $3.5 million in funding to continue testing these products in animal models before starting human trials.

“It’s exciting because this work is proof of concept for what we’re doing at ClostraBio,” Nagler said. “It shows that we can use metabolic products of the healthy microbiome to develop drugs that protect against food allergy.”

If your child has a food allergy or food intolerance, our team will work with you to develop a comprehensive management plan.

Learn more about our pediatric allergy and immunology team