A steak, medium well, with a loaded baked potato.

“And a crisp apple,” Dorian Brantley added. “I was eating applesauce, but there’s no comparison.”

These were the top items on Brantley’s list of what-to-have-first after surgery for achalasia — a rare digestive disease that makes it hard to eat or drink.

About a year ago, Brantley, a nurse at UChicago Medicine, noticed that it seemed to be taking a long time for food to move down her esophagus. At first, she thought maybe her portions were too large or she was eating too quickly.

But the condition became more and more uncomfortable. And soon both eating solids and drinking liquids caused pain.

“If my patients told me this, I’d be very concerned,” she thought.

Brantley tried a soft diet, but it didn’t help. A barium swallow test at UChicago Medicine showed that her esophagus wasn’t functioning properly.

Gastroenterologists performed an upper endoscopy to rule out stomach or esophageal cancer. Robert Kavitt, MD, MPH, then did an esophageal manometry study — a test that measures muscle contractions — and confirmed the achalasia diagnosis. Instead of relaxing to let food pass through, the smooth muscular valve at the lower end of Brantley’s esophagus (lower esophageal sphincter) was staying closed all the time.

The endoscopic approach, offers patients a quick recovery, no scar and a short hospital stay.

The cause of achalasia is not known, and it is a progressive and irreversible disease. It can lead to serious problems in the lungs and malnutrition. Brantley had lost 30 pounds between June and October.

Even as a nurse, Brantley had never heard of achalasia. "My doctors answered all my questions and put me at ease,” she said.

In late October 2017, Brantley had an endoscopic procedure called peroral endoscopic myotomy (POEM). A flexible scope was placed into Brantley’s esophagus through her mouth, and a tunnel was created between the layers of her esophagus to reach the lower sphincter, where muscles were cut, permanently opening the valve. 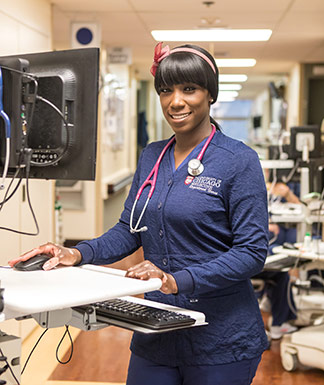 The endoscopic approach, offers patients a quick recovery, no scar and a short hospital stay.

After the procedure, Brantley was anxious at first about going back to solid foods.

“But my coworkers, friends and family all encouraged me to ‘go ahead and eat again,’” Brantley said. “You know what, I did. Everything was delicious.”

With comprehensive services and experts focused specifically on problems of the esophagus, the University of Chicago Center for Esophageal Diseases is uniquely qualified to diagnose and treat achalasia.