For several weeks, Cathy Galati noticed her husband, Leo, was not acting like himself. She wondered why her healthy, usually active 55-year-old spouse seemed to be “moping around.” He fell asleep as soon as he sat in a chair. Cathy didn’t know it, but Leo was also struggling at his job.

“I was tired and confused, and I couldn’t complete my projects at work,” said Leo, a finish carpenter for a millwork company. “It was embarrassing.”

At the time, early winter 2013, he was working nights doing renovations in an office building in downtown Chicago. “I apologized to the other guys on my crew,” he said. “I didn’t know what was going on.”

Weeks later, on a Monday afternoon, Cathy noticed Leo’s mouth drooping on one side. Worried her husband was having a stroke, she insisted he go to the local emergency room. Doctors there gave the couple shocking news: Leo had brain cancer.

A blueprint for treatment

A family friend, who is a physician, recommended Leo transfer his care to the brain tumor experts at the University of Chicago Medicine. By the time Leo arrived at the medical center a few days later, results of his MRI scans had been evaluated at a neuro-oncology Tumor Board meeting.

These regular meetings bring together UChicago Medicine experts to discuss cases, share viewpoints and determine treatment plans. This multidisciplinary approach is especially valuable when the condition is complex, rare, or difficult to diagnose.

“I was tired and confused, and I couldn’t complete my projects at work."

The neuroscientists suspected the cancer in Leo’s brain was primary central nervous system lymphoma (PCNSL), a rare type of tumor that occurs when malignant lymphocytes are found in the brain, spinal cord or cerebrospinal fluid.

To confirm the diagnosis, neurosurgeon Peter Warnke, MD, performed a serial stereotactic biopsy. This surgical technique uses fine micro forceps to take samples of abnormal tissue along a tract with millimetric precision. It can be done in any region of the brain, even the most sensitive areas. Warnke says the technique leads to a definitive diagnosis 97 percent of the time.

The tissue was examined simultaneously — by a neuropathologist looking through a microscope in a nearby lab and the entire surgical team viewing the same image on large high-definition video screens in the operating room. The group concurred on a preliminary diagnosis of PCNSL.

During the same procedure, Warnke implanted a titanium marker at the exact spot where he took the biopsy samples. “These markers enable us to review the precise site of a tumor in follow-up neuro-imaging tests during and after treatment,” Warnke said, noting the permanent marker is compatible with both CT and MRI imaging technology.

Just a week later, Leo started chemotherapy under the care of hematologist/oncologist Justin Kline, MD. Kline also had presented Leo’s case to an expert panel of physicians at the medical center — this time the Lymphoma Group, a weekly conference that brings together specialists in lymphoma to review cases and weigh the pros and cons of different therapies. 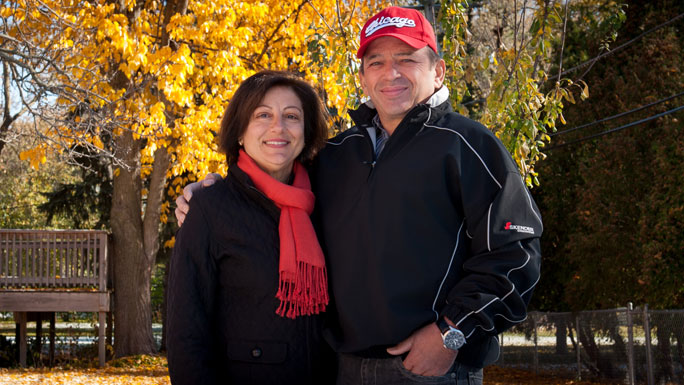 Finishing off the tumor

Unlike most individuals who get PCNSL, Leo did not have a weakened immune system or other risk factors often associated with the condition. “Being healthy placed him in a good position to receive aggressive treatment,” Kline said. Leo’s care plan included six weeks of chemotherapy spread over three months followed by a few weeks of radiation therapy. Radiation oncologist Steven Chmura, MD, PhD, designed the radiotherapy, which involved small amounts of radiation delivered to all of the brain tissue. “Because CNS lymphoma can recur anywhere in the brain and the ability of chemotherapy to get to every part of the brain is limited,” Chmura explained, “we recommend this approach as an ‘insurance policy’ against recurrence.”
Throughout the treatment, Cathy said her husband remained positive and as active as possible. A few weeks into his treatment, Leo attended their oldest son Sal’s wedding; a few months later, his family went on vacation to Florida.

A follow-up scan less than a year after diagnosis showed no signs of lymphoma. Today, Leo takes bike rides, works in the yard and does small carpentry projects around the house.

“With God’s help and the skill of the doctors who took care of me, I was determined to win the battle against cancer,” Leo said. “Now I am making the best of every day.”

Cathy agreed. “He got excellent care. Today, he is better and not missing a beat.” 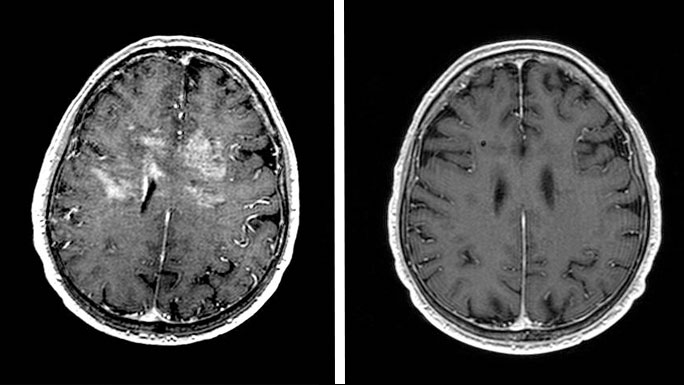 Left: Bright areas on an MRI scan show the tumor on both sides of Leo's brain. Right: MRI after treatment demonstrates a complete response to therapy

The University of Chicago Brain Tumor Center is at the forefront of sophisticated care for primary and metastatic tumors of the central nervous system (CNS), including brain and spinal cord tumors.

Justin Kline, MD, is a hematologist/oncologist who specializes in treating leukemia and lymphoma. He has a special interest in stem cell transplantation and is conducting research into overcoming the barriers to immune resistance mechanisms in tumors.