A letter from three University of Chicago researchers in this week’s New England Journal of Medicine updates a 47-year-old series of reports on the risks of exposure during pregnancy to a supplement, diethylstilbestrol (DES), that was once widely used but since 1971 has been linked to a rare cancer: clear-cell adenocarcinoma of the vagina and cervix.

In the May 3, 2018, issue of the NEJM, the authors show that DES-exposed patients with clear-cell adenocarcinoma had “increased mortality across their life span.”

This series of reports on DES began on April 22, 1971, when the NEJM published a classic study, titled “Adenocarcinoma of the Vagina — Association of Maternal Stilbestrol Therapy with Tumor Appearance in Young Women.” It described a few unusual cancer cases at a Boston hospital: eight women, age 15 to 22, who suffered from this extraordinarily rare tumor.

Although clear-cell adenocarcinoma had been described in older women, “none of us had heard of it in young people,” recalled the study’s lead author Arthur Herbst, MD, the Joseph Bolivar DeLee distinguished service professor emeritus and former chairman of obstetrics and gynecology at the UChicago.

Herbst and his Boston colleagues connected the onset of this rare cancer to DES exposure. Seven of the eight women with clear-cell adenocarcinoma in the original study had taken DES.

This finding raised many concerns. In the previous 25 years, an estimated 4.8 million women in the United States and as many as 10 million worldwide had taken DES during pregnancy. These eight cases were the first evidence of a delayed but potentially devastating side effect. 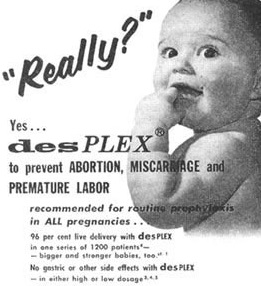 DES, created in 1938, the same year as the Food and Drug Administration (FDA), was the first synthetic estrogen. It was cheap, potent and unpatented. It was initially developed and tested for use in livestock, but in 1941 the FDA approved human use of DES for a wide range of indications, primarily relief from “estrogen-deficient states.” In 1947, the agency added miscarriage prevention.

Advertisements in medical journals claimed DES combined with certain vitamins could prevent abortion, miscarriage and premature labor 96 percent of the time and was “recommended for routine prophylaxis in ALL pregnancies.”

Four years after the FDA approved DES for pregnant women, William Dieckmann, MD, chairman of obstetrics at the UChicago at the time, launched a randomized, controlled clinical trial of the hormone. The results, published in 1953, showed DES had “no beneficial effect whatsoever on the prevention of miscarriage.” Nevertheless, the drug remained in use for that purpose. Ten years later, the National Academy of Sciences still rated it as “possibly effective.”

In 1966, a few odd cases of young women with tumors previously seen only in post-menopausal women began turning up. Herbst and pathologist Robert Scully, MD, at the Massachusetts General Hospital, collected cases of clear-cell adenocarcinoma. They interviewed the mothers. One mother mentioned that she took a drug during pregnancy, something called DES, and wondered if that had anything to do with it.

Soon, the researchers had eight cases. Seven of the eight mothers with daughters with clear-cell adenocarcinoma took DES during the first trimester for either bleeding or prior miscarriage, and one of the 32 controls did. The odds of that happening by chance were less than one in 100,000.

“These women were given the drug in good faith by people who believed it would help them,” Herbst said. “They took it because they wanted to have a baby. And then they find out — 15, 20, 25 years later — that this terrible thing happened. The feeling of guilt was awful.”

As soon as the 1971 paper was published “it was all over the news,” Herbst said. An accompanying editorial called it a work of “great scientific importance and serious social implications.” The FDA warned against the use of DES in pregnant women. It was withdrawn from the market a few months after publication.

These women were given the drug ... because they wanted to have a baby. And then they find out — 15, 20, 25 years later — that this terrible thing happened. The feeling of guilt was awful.

From eight cases in 1971, the numbers quickly multiplied. A follow-up study, published in 1972, included 91 cancer cases in patients age 8 to 25. By 1981, 10 years after the initial study, the Registry included nearly 500 adenocarcinomas of the vagina or cervix in women age 7 to 30 at diagnosis. By 2014, the study had registered about 700 adenocarcinoma patients and collected their long-term follow-up data. They had a 20-year survival rate of 69 percent, thanks to early diagnoses and aggressive surgery.

The excess risk of death after age 50, reported in the current study, emphasizes the importance of other life-threatening health conditions in later life of the DES population. Many of these women have structural changes in the vagina, cervix, uterus or fallopian tubes. These can make it more difficult to conceive a child or carry a pregnancy to term. DES sons have some genital-tract abnormalities, such as cysts and, perhaps, undescended testicles. The grandchildren, although still being assessed, do not appear to have any third-generation effects.

The DES story highlighted the extreme vulnerability of the developing fetus. A perspective piece in the NEJM, emphasized how the discovery “changed medical thinking” about embryologic development and the mechanism of carcinogenesis. A follow-up commentary in the NEJM, published in 2011, concluded that the DES saga “humbles us. It serves as a reminder that though the narrow lens of today might reassure us that an intervention is safe, it is only with the wisdom of time that the full consequences of our actions are revealed.”

The study was funded by the National Cancer Institute and the National Institutes of Health. Authors were Dezheng Huo; Diane Anderson, manager of the DES registry, and Arthur Herbst, all from the University of Chicago. DOI: 10.1056/NEJMc1800097