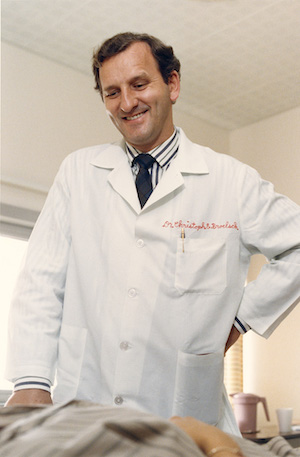 The field of liver transplantation and liver surgery has lost one of its most influential and innovative pioneers. Christoph Erich Broelsch, MD, internationally recognized as a pioneer in liver transplant surgery and one of the first surgeons to perform a successful living-donor liver transplant, died February 12 in Dusseldorf, Germany. He was 75 years old.

Broelsch, a talented and experienced transplant surgeon, came to the University of Chicago in 1984 to lead the Medical Center’s liver transplant program. He and his colleagues, working closely with Mark Siegler’s ethics program, quickly introduced a number of innovative surgical and ethical approaches, all designed to make the best possible use of liver tissue, a scarce resource. In 1989, Broelsch’s team was the first to report a living-related-donor liver transplant.

On August 31, 1989, a few months before the first such operation, Broelsch and colleagues published a paper in the New England Journal of Medicine to explain their medical and ethical reasoning as they began to select potential patients and donors. “We propose to transplant a liver lobe from a living donor — the parent of the recipient — to a non-critically ill infant with advanced liver disease,” they wrote.

They also organized a year-long series of clinical-ethical seminars and discussions that were open to the entire university community. On the basis of these seminars, they drafted and circulated for comment “a working paper on the ethics of liver transplantation with living donors.”

Three months later, on Nov. 27, 1989, Broelsch’s team performed the first living-related liver transplant in the U.S. and one of the first in the world. A front-page New York Times article, published the morning of the operation, noted that “The University of Chicago Medical Center's experiment with living-donor liver transplants is being carefully watched by transplant surgeons throughout the world who hope to adopt it if it proves successful.”

Those surgeons, the Times added, “expect that by using portions of livers from living donors, they can alleviate the organ supply problem and can do liver transplants before the children are critically ill.”

The donor and recipient in that historic operation were Teresa Smith, a 29-year old woman from Texas, and her 21-month old daughter, Alyssa. Both recovered from the operation and quickly returned to a normal life. Alyssa had to take immune-suppressive medications, but guidance from the transplant team enabled her to steadily lower the dose.

Years later, when Alyssa was in high school, she stopped taking those medications on her own. She remained healthy, graduated from college and got married. She and her husband are now expecting the birth of their second child.

In late 1991, Broelsch was aggressively recruited to lead the transplant program at the University Medical Center Hamburg-Eppendorf, Germany. In 1998, he moved from Hamburg to University Hospital, Essen, to become professor and chairman of the Department for General, Visceral and Transplantation Surgery.

He continued to receive multiple honors and awards for his surgical innovations, including the Federal Cross of Merit in 1991, the Lucie-Bolte-Prize in 2002, and the Grand Cross of Merit of the Federal Republic of Germany in 2004. He was the personal doctor and a close friend of the former German president Johannes Rau.

Back in 1989, a Chicago Tribune Magazine article praised the University’s liver transplant team, not just for its heroic efforts to save the lives of young children, but also for its devotion to openness and transparency.

“In forging ahead with the program with what most observers concede was unusual propriety and candor--first before the operation, when it publicly aired the ethical arguments both for and against the use of live donors and tried painstakingly to chart an ethical course and afterward--when it gave the media near total access to the story, warts and all, the University of Chicago Medical Center has attempted to rewrite the book on how major institutions should introduce radical new procedures.”

Broelsch is survived by his wife Bianka, three sons and 6 grandchildren.