Nestled in the sub-basement of the Bernard Mitchell Hospital, the 18 MeV IBA Cyclone cyclotron will allow UChicago researchers to manufacture radioactive isotopes, which can be used to diagnose disease, predict outcomes, and assess the effects of drugs. With the ability to more easily incorporate chemistry into imaging, the university will revive its radiochemistry program and expand its multidisciplinary molecular imaging program.

Chin-Tu Chen, PhD, associate professor of radiology, was a member of the original radiochemistry research team that worked with UChicago's first cyclotron, which was installed in 1968 and decommissioned in 1997. "I spent a good part of my academic life trying to resurrect this facility," he said. "Now that we have the new cyclotron, we can really fuel the engine to empower our molecular imaging research."

A cyclotron is a type of particle accelerator, invented in 1934, that uses a magnet and high electrical voltage to accelerate charged particles in a spiral motion. The particles eventually collide with a target, causing a nuclear reaction to produce radioactive isotopes.

These isotopes are combined with chemical compounds to create injectable radioactive molecules, or tracers, which are used in Positron Emission Tomography (PET) scans. In a PET scan, a radioactive tracer is injected into the patient. Radiologists then use imaging techniques to follow the "glowing" tracer as the patient's body processes the molecule. 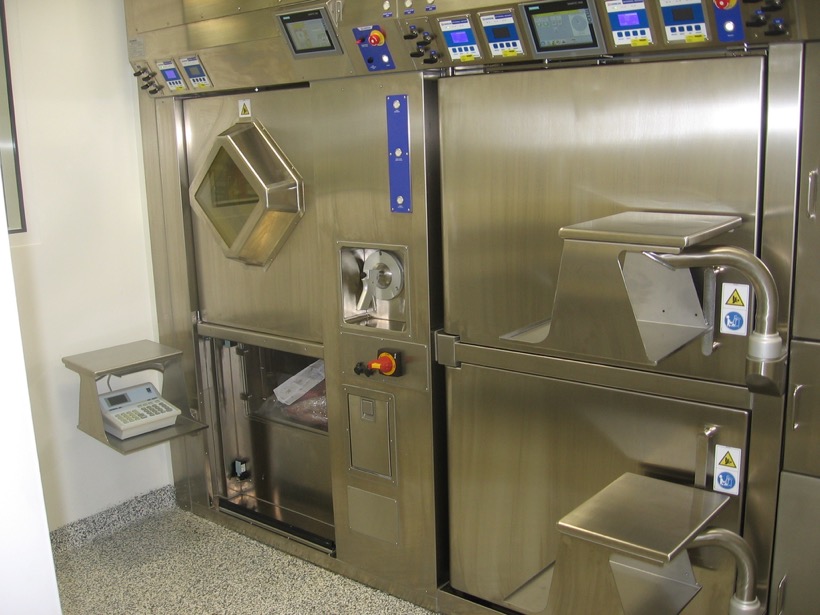 18F-FDG (fluorodeoxyglucose) is the standard radioactive tracer used in PET, and has a similar molecular structure to sugar or glucose.

"Any cell in the body that needs glucose will take it up preferentially over another neighboring cell that doesn't need glucose," said Richard Freifelder, PhD, cyclotron program director. "If you have a fast growing tumor, the tumor lights up because it needs glucose as its energy source."

Since most cancer cells absorb more 18F-FDG than healthy cells, radiologists can detect the radiation given off by a tumor to get a clearer picture of where cancer cells are in the body.

"In essence, PET will provide you with the imaging of life and life processes at the molecular level," said Chen, who noted that the radiation from the isotopes is less than a person would be exposed to on an airplane ride. "PET is very powerful as a tool to help realize the concept of individualized or precision medicine. It can be a tool to pre-evaluate whether you will respond to a certain drug or not."

Radioactive isotopes have a short half-life, or lifespan. They begin to degrade as soon as they're created, some lasting for only a few hours or less. Though radioactive isotopes can be purchased from outside vendors, they may decay significantly if transported long distances. Therefore, only the isotopes with the longest lifespan are commercially available.

With a cyclotron on campus, scientists will have the ability to make a broader range of radioactive isotopes in-house and, therefore, manufacture and use tracers more efficiently, effectively, and for a wider range of drugs and diseases. This will enable faculty to conduct research and clinical trials that would otherwise be impossible.

It took workers three days to move the cyclotron, inch-by-inch, from a loading dock to its new facility

While the team works to get the cyclotron online, the radiochemistry program has already begun manufacturing five 18F radioactive tracers, including FDG and FLT (fluorothymidine), using isotopes from outside vendors. The Department of Radiology, led by David Paushter, MD, chair and professor of radiology, has filed and received approval of a physician-sponsored Investigational New Drug (IND) application with the U.S. Food and Drug Administration (FDA) for the production of FLT by a commercial vendor for use at UChicago. In April of 2017, the manufacturing of the drug will be done in-house at the new cyclotron facility.

"The cyclotron itself is in a concrete vault," said Freifelder, who ran the cyclotron facility at the University of Pennsylvania for 12 years. "The vault is in the sub-basement, and it has walls and ceilings that are concrete of about 7-feet thick. Everything having to do with radioactive drug production has to be under control, and the quality of the drug [tracers] is paramount."

Freifelder came to UChicago in 2014 to lead the project and has been instrumental in the facility's design, construction, and compliance with regulations.

Funding for the $8.4 million project came in part from the William F. O'Connor Foundation, the Duchossois Family Foundation, Ludwig Cancer Research, and the University of Chicago Cancer Research Foundation. "I have a lot of ambitious plans to utilize this facility," said Chen. "And, fortunately, we have very good colleagues and partners who are trying to work together to do this."