Most days you can find Keith Affeld working in his yard or tinkering with his 1940 Chevy sedan. Having worked in a steel mill for 43 years, he is no stranger to the rigors of physical labor. At 65, he still mows his own lawn.

“Throughout my career I’ve done a lot of lifting, turning, twisting, climbing and hammering, never suffering from more than a minor muscular backache,” he explained.

However, that all changed in October 2014, when Affeld reached down to pick a weed from his wife’s flower garden. “As soon as I pulled that weed I fell forward,” he said. “I guess I turned wrong and that was it for my back.”

The resulting functional change was dramatic, with Affeld describing “shooting pain down my right leg, no matter what I did.” He said it only continued to get worse, eventually requiring use of a wheelchair most of the time. After ordering preliminary imaging tests, his family physician referred him to a local specialist. Adding insult to injury, he was told it would be an eight-week wait before he could be seen for an initial evaluation.

“I’m doing everything I did before, just using common sense,” he said.

Dismayed by the delay, his wife, Colleen, decided to call on a neurologist she had previously seen at the University of Chicago Medicine, emailing her the information on her husband’s initial tests. “She got back with me immediately -- on a Saturday, no less -- and provided the names of two spine surgeons who could see Keith the following Monday or Tuesday,” she said. Although UChicago Medicine is a 45-minute drive from their home in Valparaiso, Ind., the Affelds didn’t hesitate to take the first available appointment with orthopaedic spine surgeon Michael Lee, MD.

“We pride ourselves on quick patient access,” Lee said, noting that an acute onset of severe right leg pain typically suggests that a nerve is compressed in the lumbar spine. “In Mr. Affeld’s case, this was caused by severe arthritic changes compressing his nerve, as well as spondylolisthesis.” Also commonly known as a slipped vertebrae, spondylolisthesis occurs when a vertebra shifts forward over another below.

Suspecting a strong inflammatory component to his pain, Lee initially tried an injection consisting of a steroid and a local anesthetic. When it did nothing to address the pain, he determined that surgery was necessary.

“This is essentially the same surgery as the traditional open approach, however it has been proven in scientific literature to reduce bleeding and shorten the length of an average hospital stay,” Lee explained. In his academic role at UChicago Medicine, he teaches the progressive procedure to other orthopaedic spine surgeons.

Although Affeld still had some pain initially following surgery, which is not uncommon as the nerve recovers, he was astonished to be back on his feet the day after his procedure, walking the hospital hallways with light assistance. At his two-week follow-up visit, “the relief was remarkable,” he said, calling it “a miracle for me.” 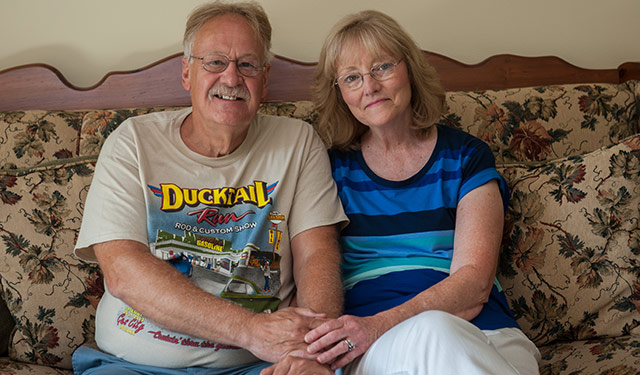 Affeld and his wife Colleen

Today, Affeld has resumed all of his old activities, which include traveling in the 1940 Chevy Master DeLuxe to car shows across the country. “I’m doing everything I did before, just using common sense,” he said.

Who knows? He may even take up golf again -- a pastime he and Colleen can look forward to now that he’s enjoying his retirement pain-free.

The University of Chicago Medicine spine team offers a wide range of non-surgical, minimally invasive and traditional proven surgical techniques for the treatment of back and neck problems.

Read more about our spine services

Q&A: What parents need to know about pediatric scoliosis
New embolization treatment under study aims to relieve osteoarthritis knee pain
Knee replacement surgery allows chef to live pain-free
Groundbreaking new device helps correct Chicago man’s severe bow legs
How to better protect young athletes from sports injuries
Arthritis: What is it, what causes it and how to treat it?
Play it safe outside: Help kids avoid sprains, fractures and other injuries
UChicago Medicine, WNBA Chicago Sky renew partnership agreement
What are the signs of arthritis in the hands?