Before (left) and after (right) scan of the brain of a CLEAR III patient. A ventricular catheter has been used to administer tPA. The volume of blood from a intraventricular hemorrhage (white-grey mass in the middle of the brain) is significantly reduced post-treatment.

The use of clot-busting drugs to clear blood from the brain's ventricles may be the first effective strategy to decrease mortality for a type of catastrophic bleeding stroke, according to phase-3 clinical trial results announced Thursday at the International Stroke Conference in Los Angeles. The treatment also significantly reduced post-stroke disability in a subset of patients, according to data presented by trial leaders from Johns Hopkins University and the University of Chicago. 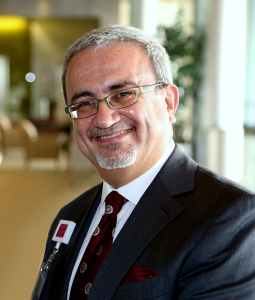 "Hemorrhage in the brain used to be an essentially untreatable condition, but we now have hope with a therapy that may be effective at saving lives," said Issam Awad, MD, John Harper Seeley Professor of Surgery at the University of Chicago Medicine, who was co-chair and surgical director for the CLEAR III clinical trial.

CLEAR III tested the benefits of the clot-busting drug alteplase, also known as tPA, in improving outcomes for intraventricular hemorrhage. In this particularly severe form of stroke, blood pools and clots in the brain's ventricles-cavities that normally hold cerebrospinal fluid. The randomized, double-blinded and controlled trial enrolled 500 patients from 73 clinical sites around the world. Every patient received either tPA or saline through a brain catheter, and were otherwise treated by current standards of critical care.

Researchers found that swift application of tPA directly into the ventricle, combined with a drainage catheter, reduced overall death rates by 10 percent, or about a third relative to death rates in the saline group. Treatment with tPA almost doubled the likelihood of good functional recovery in patients with high volume bleeds who had most of the blood removed. Patients with smaller clots did not benefit, but no adverse side effects were observed when compared to the control group.

"For many patients, this approach can significantly reduce disability after a stroke, and can be the difference between going home instead of going to a nursing home," Awad said.

Hemorrhagic strokes are triggered by ruptured blood vessels that leak blood into the brain, increasing intracranial pressure and causing severe damage to brain tissues. Accumulated blood quickly clots and is difficult to remove even by open brain surgery. Around 15 percent of strokes are hemorrhagic, but they account for roughly 40 percent of all stroke deaths. Nearly half of these bleeding strokes involve some degree of intraventricular hemorrhage (IVH), a complication where blood pools in the ventricles. IVH can be particularly catastrophic, with an estimated mortality rate between 60 and 80 percent. Among those who survive, as many as 90 percent become severely disabled.

[caption]Intraventricular blood (red) is cleared from the ventricles by tPA and a brain catheter (yellow). Images are 3D renders of CT scans from a CLEAR III subject.[/caption]

Early studies suggested tPA, an FDA-approved clot buster for conditions such as heart attacks and non-bleeding strokes, might be effective in removing accumulated blood and alleviating its damaging effects after a hemorrhagic stroke. To study the feasibility of this approach, a phase-2 clinical trial (CLEAR-IVH), initially tested tPA in a small group of IVH patients.

After patients were stabilized, tPA was administered directly into the ventricle through an external, surgically placed catheter. The patients received the tPA for three days and a catheter continually drained blood until the ventricle cleared. The study confirmed the safety and efficacy of the procedure, and supported the need for a large-scale phase-3 trial.

CLEAR III, which was overseen by Awad and Daniel Hanley, Jr., MD, the Harriett Legum Professor of Acute Care Neurology at Johns Hopkins Medicine, began in 2009 and was completed in 2015. Roughly half of the 500 enrolled patients received tPA and the other half received saline. Both groups had extraventricular drains and were treated by the current best standards for critical care. All patients were monitored remotely to maintain consistent treatment across centers, which could vary greatly in facilities, staff and languages. Data analysis and overall trial oversight was provided by the Johns Hopkins team.

To ensure safety and accurate catheter placement, surgical oversight was provided by Awad and his staff at the University of Chicago Medicine, which served as the surgical center for the trial. Before tPA could be given, images of catheter placement for every patient had to be sent to and analyzed by the UChicago team, who were on call 24/7 throughout the five-year trial.

"We had to verify that all the criteria were met in order to deploy that treatment safely," Awad said. "Every single patient was monitored in real time, often over an iPad or iPhone, to make sure the drug reached the right part of the brain." 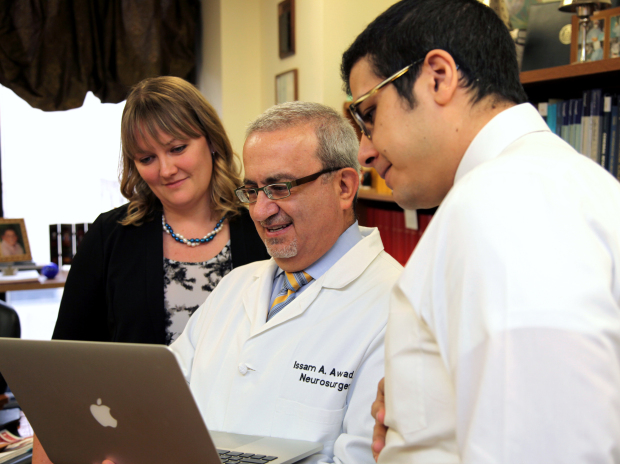 The results of CLEAR III show tPA treatment significantly decreases mortality in one of the worst forms of hemorrhagic stroke. Analyses led by Awad and his team revealed the most important factor in improving functional recovery was the volume of blood removed.

The likelihood of a good outcome in patients with larger clots, defined as greater than 20 mL of pooled blood, improved by nearly 20 percent. The more blood that was cleared, the greater the odds were of reduced disability-rising to nearly double in patients who had 90 percent of their clots removed. Patients who received additional doses of tPA and had multiple drainage catheters inserted had higher clot removal. In patients who started with less than 20 mL of blood in the ventricles, no benefits were observed.

"Outside our study this drainage was only used in 8 percent of hemorrhagic stroke cases, and we showed this technique can really make a difference," Hanley said. "Our results suggest that physicians should begin to think about routinely using it for stable hemorrhagic stroke patients."

CLEAR III data now support the use of tPA and a ventricular drain as the most effective treatment for patients with high volume IVH strokes. Awad notes that, if possible, these patients should be treated at comprehensive stroke centers, which have access to neurosurgeons, neurocritical care specialists and other resources for severe strokes. The CLEAR III team is now implementing an educational strategy on how to manage IVH with tPA at comprehensive stroke centers around the U.S.

"When we entered into the trial, we knew very little about how this therapy ought to be used, in whom it should be used, and whether it was safe," Awad said. "We now have clear data on how best to implement the procedure, and for at least a group of patients, we know it can nearly double the likelihood of a favorable outcome."

A sister clinical trial, MISTIE, co-led by Awad and Hanley, is currently underway to test the safety and efficacy of tPA as a treatment for patients with hemorrhagic strokes in which bleeding occurs in brain tissue but does not leak into the ventricles. Patients for that study are currently being enrolled. 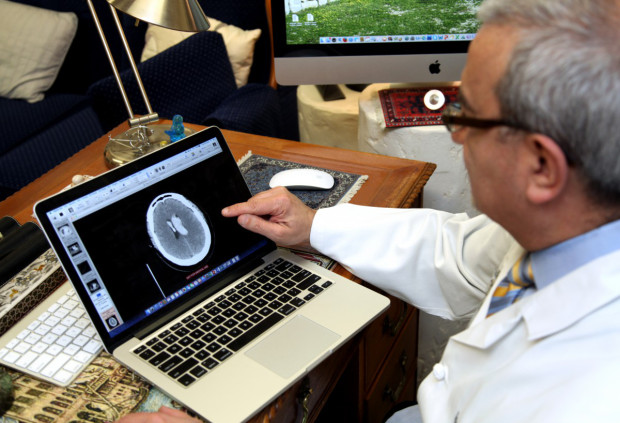 Issam Awad reviews CLEAR III data to ensure safety and accurate catheter placement. Before tPA could be given, images of catheter placement for every patient had to be sent to and analyzed by the UChicago team.

CLEAR III was supported by the National Institute of Neurological Disorders and Stroke (5U01 NS062851) and Genentech.