Amyloid deposits (highlighted in yellow) in a transgenic mouse brain

One of the telltale signs of Alzheimer’s disease is the buildup of “plaques” or clumps of proteins in the brain that damage nerve cells and ultimately lead to dementia, loss of memory and other signs of cognitive decline. There is no cure for Alzheimer’s, of course, but a lot of the research on the disease is focused on slowing its progress by stopping the accumulation of these plaques.

Prof. Gopal Thinakaran studies the underlying causes of Alzheimer’s in the Department of Neurobiology at the University of Chicago. He, Robert Andrew (a postdoctoral researcher) and Celia Fernandez (a graduate student) recently led a study looking at the role of an enzyme that triggers the production of beta-amyloid peptides, the molecules that form the damaging plaques in the brain. We spoke to them about their research, which was published this week in the Proceedings of the National Academy of Sciences.

What specific questions did you want to answer with this study? 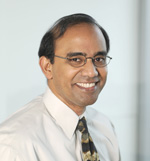 We want to understand what causes Alzheimer’s disease and find ways to benefit patients with the disease already and those at a higher risk of getting it. The potential goals are to delay the disease onset and slow its progression.

Our research focuses on combating the small toxic peptides, called beta-amyloid, that accumulate in plaques in the brains of patients with Alzheimer’s disease. These peptides damage the neurons and brain networks, ultimately causing cognitive deficits. Two enzymes cut a larger protein in pieces to release beta-amyloid peptides. We have been studying one of them called BACE1, the protease that first cuts the amyloid precursor protein to initiate beta-amyloid production.

Patients with Alzheimer’s disease have higher levels of BACE1 in the brains, and BACE1 also accumulates in swollen nerve terminals near senile plaques. These changes in BACE1 are thought to contribute significantly to the amount of amyloid in the brain. How BACE1 travels along the long neuronal extensions, called axons, and what causes them to accumulate at the nerve terminals are not entirely understood. In earlier research in our lab, we identified that the BACE1 protein is modified by attaching specific lipids, in a process called palmitoylation. The localization and function of several neuronal proteins that have the palmitate lipid modification are dynamically regulated. Thus, we wanted to see if the attachment of lipid palmitates to the BACE1 protein is vital for its transport to nerve terminals, and whether the BACE1 function in producing beta-amyloid peptides in the brain depends on these lipid modifications.

Our strategy was to generate “knock-in” mice with specific changes in the BACE1 gene (called KI mice) so that the lipid palmitates can no longer be attached to the BACE1 protein. This approach allowed us to determine the importance of these modifications under normal physiological conditions, and when the KI mice were engineered to develop brain amyloid pathology similar to human patients with Alzheimer’s disease.

We asked whether the KI mice produced similar levels of beta-amyloid when compared to control mice and whether the amyloid levels in KI mice were elevated with an increase in brain activity. We also looked at whether the KI mice with no lipid modification on BACE1 had higher or lower levels of amyloid. What we saw was that the absence of the lipid modification on BACE1 protein did not affect BACE1 enzyme activity, but the KI mice did not increase beta-amyloid production in response to neuronal activity. More importantly, the KI animals had reduced levels of beta-amyloid in the brain and a decrease in BACE1 accumulation at the nerve terminals surrounding amyloid deposits. The KI mice also performed much better than control animals in behavioral tests that evaluated their memory. The reduction in amyloid burden in KI was enough to limit cognitive deficits. So, using transgenic mouse models, we showed that modifying lipids of BACE1 protein has a significant impact on the development of the beta-amyloid plaques associated with Alzheimer’s disease, and the consequent cognitive decline.

How can other researchers build upon your findings? 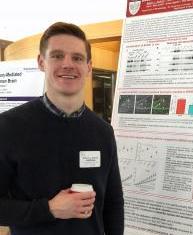 This is the first time subtle genetic manipulation of BACE1 has been shown to alter its ability to produce beta-amyloid and preserve cognitive function in live animals. The KI mouse model we produced gives further insights into interesting aspects of BACE1 physiology and function in the brain, and it reveals how BACE1 protein’s presence in specific sites within neurons is linked to its capacity to produce beta-amyloid in live animals.

Importantly, we were able to show that the beneficial effects occurred without some of the side effects associated with the total loss or the inhibition of BACE1 function in the brain. Despite intense efforts by both academic labs and the pharma industry, mechanism-based toxicity has hindered the progress and success in the therapeutic application of drugs that can ameliorate BACE1 function. Our research indicates that exploration of areas of BACE1 physiology could lead to novel mechanisms through which beta-amyloid production could be attenuated without encountering adverse effects.

What are the broader implications of these findings?

There are drugs currently in clinical trials which inhibit BACE1 enzyme activity and reduce amyloid production. However, these drugs may also prevent BACE1 from producing several other protein fragments which are essential to brain health. Our study shows that it may be possible to precisely target BACE1’s production of beta-amyloid, without affecting its ability to carry out other essential functions in the brain.

What are you working on next?

We are continuing our work on BACE1 using cell culture and animal models to understand how trafficking dysfunction leads to increased beta-amyloid production in the brain. We are also focusing our attention on some of the genetic risk factors associated with late-onset Alzheimer’s disease. Here again, we are using cell culture and animal models to determine how the risk factor genes elevate one’s lifetime risk of developing Alzheimer’s disease.

Alzheimer’s disease is a complex disease that can only be tackled successfully with a multi-prong approach. Ultimately, our goal is to make unique contributions to the ongoing large-scale efforts to identify potential targets for therapies aimed at modulating disease pathogenesis.