Why do so many people avoid the flu vaccine?

A survey conducted in November by the University of Chicago’s National Opinion Research Center (NORC) found that 41 percent of adults did not intend to get a flu shot this year (2018).

File that under “what were they thinking?”

Seasonal influenza epidemics cause 3 million to 5 million severe cases and 300,000 to 500,000 deaths globally each year, according to the World Health Organization.

Last year’s flu season was an eye opener. According to the CDC, influenza killed almost 80,000 peoplein the United States during the 2017-18 season. There were 49 million cases, and 960,000 hospitalizations. The previous high for a regular—as opposed to catastrophic— flu season was 56,000 U.S. deaths.

“The majority of the 185 children who died from flu last year did not receive the flu vaccine,” said infectious disease specialist Allison Bartlett, MD, an associate professor of pediatrics at UChicago Medicine. “Studies have shown that flu vaccination cuts the risk of flu-associated death by half in children.”

The Centers for Disease Control and Prevention (CDC) recommends flu shots every season for everyone older than 6 months of age. There are very few exceptions. People who have had a severe allergic reaction to the flu vaccine shouldn’t get one. People who have an egg allergy should get the vaccine in a medical setting.

Some people get a flu shot and still get influenza. “Even though vaccination may not completely prevent flu, the symptoms tend to be less severe in people who have been vaccinated,” said Bartlett.

The current strategy for seasonal influenza vaccination “keeps us at least one year behind this ever-evolving virus,” according to scientists at the National Institute of Allergy and Infectious Diseases. But even for those unfortunate few, a flu shot can help. The vaccine can lessen the severity and shorten the duration of the disease.

A 2017 study confirmed that flu vaccination reduced deaths, admissions to intensive care units, time spent in an ICU or in the hospital. A recent CDC study found that vaccinated adults hospitalized with influenza were 59 percent less likely to be admitted to the ICU than patients who were not vaccinated. 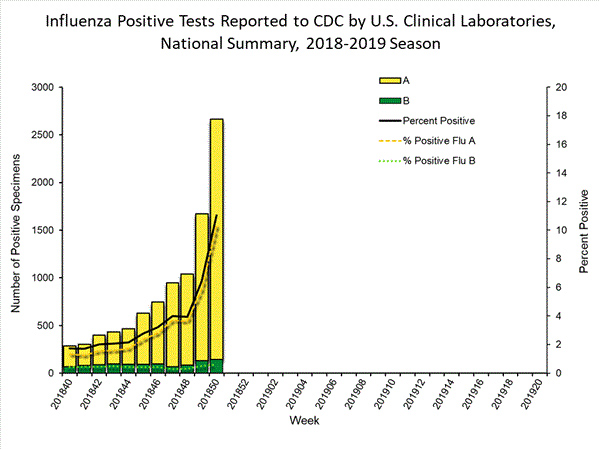 But nothing, so far, has rivaled the 1918-19 flu pandemic, which killed an estimated 50 million people worldwide. This was “an event worth contemplating,” according to physician-historians David Morens, MD, and Jeffery Taubenberger, MD, PhD, at the National Institutes of Health.

In 1918, the flu season started in the spring. It picked up speed from summer to fall. Then it exploded. In the course of a year, it killed an estimated 675,000 Americans, half of them in their prime, 20 to 40 years old. More than 100,000 Americans died in one month, October 1918. Overall life expectancy in the United States dropped about 12 years.

At first, people got the flu. Then some developed secondary bacterial infections. Progression to pneumonia usually began a few days after the onset of influenza. There were no vaccines at the time to protect against the flu virus, no antiviral drugs to combat influenza and no effective antibiotics to counter secondary bacterial infections. This left what Morens and Taubenberger called a “very narrow window for beginning lifesaving treatment.”

The possibility that millions of people could suddenly need intensive care with ventilatory support is “a frightening reminder of the challenges of an influenza pandemic,” they added.

1918 was a bad year all around. World War I, a war fought primarily in muddy trenches, was still underway. Unusual flu activity was first detected in military camps during the spring of 1918. A second, far more virulent wave followed in September 1918 and lasted through November. A third wave came early in 1919 and persisted into the summer.

The wartime circumstances of the epidemic (malnourishment, poor hygiene, overcrowded medical camps and hospitals) paved the way for bacterial superinfections. The combination of the influenza virus plus virulent respiratory bacteria killed most of the victims.

Even though vaccination may not completely prevent flu, the symptoms tend to be less severe.

Overcrowded camps and packed hospitals — which treated thousands of victims of chemical attacks and other casualties of war — made it easy for a respiratory virus to spread. Close quarters and massive troop movements promoted the pandemic, empowered disease transmission and prompted rampant viral mutation.

One hundred years later, this ever-shifting virus lives on. The 1918 virus came from an avian source. Birds transmitted it to humans and the virus adapted, learning how to spread from person to person. The virus behind the 1918 epidemic turned out to be extremely lethal. Even a low dose multiplied quickly, killing exposed laboratory mice within three days.

There is, perhaps, good news. Successive pandemics and pandemic-like events appear to be decreasing over time. Advances in medicine and public health played a crucial role, but the persistence of influenza may also reflect viral evolutionary “choices” that favor widespread transmission over lethality; a virus that quickly kills its hosts is not optimally transmissible.

“Our efforts in the lab are to find ways to improve influenza vaccines to both limit annual epidemics and to avoid future pandemics,” said influenza researcher Patrick Wilson, PhD. “We do this by identifying parts of influenza viruses that are similar for all strains and then target these regions with vaccines. This is much harder than it sounds.”

Meanwhile, the Bill & Melinda Gates Foundation and the Page Family have launched the “Universal Influenza Vaccine Development Grand Challenge.” The goal is to identify transformative concepts that will lead to “development of universal influenza vaccines … better preparing the world for the next influenza pandemic.”

Allison Bartlett, MD, MS, specializes in the medical management of acute and chronic infectious diseases. She also is working to improve the safety and efficacy of antibiotic use in children.

Research that reaches out to help
The Future: Diabetes Youth and Parent Group
Meet Kovler Diabetes Center's first social worker
Pursuing accurate diagnosis for minorities with MODY
UChicago Medicine expands its primary care footprint with new facilities and more providers
Maximizing health and wellness through microbiome research
How to stay safe during summer fireworks season
Can your eyes get sunburned? 10 answers to your biggest summer eye care questions
Are sparkling water and hard seltzer bad for you?