Searching for the keys to immunotherapy success in the tumor microenvironment

In December, 2013, the leading U.S. scientific journal selected cancer immunotherapy as the "Breakthrough of the Year." This approach, known for its ability to "take the brakes off the immune system," enables specific types of T cells, the immune system's primary anti-cancer warriors, to detect, invade and destroy tumors.

But there was a problem. While the most common forms of cancer immunotherapy, known as checkpoint blockade and adoptive T cell therapy, may work for a substantial fraction of patients, they do not to work for many. Blame for treatment failures is usually attributed to the emergence of so-called "cold," or non-T cell-inflamed tumors cancers that have somehow built barriers that prevent T cell infiltration even when a patient, or a mouse, is taking the drugs designed to open the gates for tumor access.

In the May 8, 2017, issue of Cancer Cell, four current and former University of Chicago-based researchers describe the process that nullifies T cell recruitment and suggest approaches that may be able to transform such cold, sheltered, T cell-deprived tumors into exposed, vulnerable, T cell-ravaged hot ones.

"We identified the first tumor-intrinsic pathway that can cause resistance to various forms of immunotherapy, not only checkpoint blockade but also adoptive T cell therapy," said the study's senior author Thomas Gajewski, MD, PhD, professor of medicine at the University of Chicago. "This study describes the probable mechanism and suggests that development of novel drugs that inhibit this evasion pathway could improve cancer treatment and expand access to effective immunotherapy to patients with a wide range of cancers."

Tumors create their own roadblocks

The first hurdle the researchers discovered was the "failed accumulation" of one component of the immune system, CD103+ dendritic cells, into a tumor. Previous studies showed that these cells in this case, acting as advance scouts for the immune system were crucial for entering a tumor and sending out requests for assistance from cancer-cell-killing T cells. 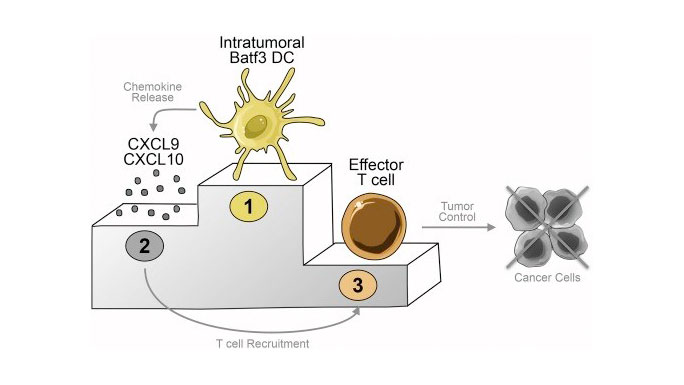 These dendritic cells must be present within the tumor, be activated, and emit these chemical signals in order for T cells to gain access and ultimately control the cancer. The absence of CD103+ dendritic cells from the tumor microenvironment appears to be a dominant mechanism of resistance to multiple immunotherapies.

The reason for failed recruitment of these immune cells into the tumor microenvironment was activation of a pathway involving beta-catenin, a multitasking molecule with many functions. Tumors that don't activate beta-catenin can allow dendritic cell entry, leading to an immune response and ultimate tumor cell death. But tumors that activate beta-catenin use it to shield themselves. Even adoptive transfer of 100 million highly-focused T cells into mice with beta-catenin expressing tumors had no effect, leaving the tumors to grow.

To confirm their findings, the researchers filmed battle scenes of T cells attacking tumors. They inserted a red fluorescent protein into lab-grown T cells and added a green glowing protein to mouse tumor cells. Then they installed a clear "window apparatus" over the tumor and took sequential images of the encounter for several days.

They found that tumors that were not protected by beta-catenin allowed T cell entry and direct contact leading to tumor cell death. Beta-catenin positive tumors, however, were able to keep T cells at bay, outside the tumor microenvironment.

The study "stresses the potential importance of these dendritic cells for optimizing patient responses through recruitment of potent tumor reactive T cell and promises new ways to better inform treatment decisions for cancer patients," according to a commentary on the article by a team from the Massachusetts General Hospital / Harvard Medical School.

Strategies to help T cells gain access to the tumor microenvironment "will be critical in order to increase the fraction of patients responding to immunotherapy," according to Gajewski's team. "Our current work provides evidence that tumor-residing CD103+ dendritic cells are required."

"This observation provides a rational for generating drugs or drug combinations that enrich and activate dendritic cells at the tumor site," said co-author Stefani Spranger, PhD, a former post-doctoral fellow in Gajewski's laboratory and now an assistant professor of biology at the Koch Institute for Integrative Cancer Research at MIT. "These dendritic cell-activating agents should work very synergistically with checkpoint blockade therapy."

This study has clear clinical implications. Tumors that prevent entry by CD103+ dendritic cells appear to be able to resist the efforts of either a patient's native T cells or adoptive transfer of lab-grown T cells. Efforts to restore the recruitment and activation of a powerful immune response to tumors by gaining dendritic cell access, for example, through the development of beta-catenin inhibitors, "should be evaluated as an approach to expand the fraction of patients who respond," the authors conclude.

This research was supported by a Team Science Award from the Melanoma Research Foundation, the Cancer Research Institute and the National Cancer Institute. Dr Gajewski is co-founder and shareholder of Jounce Therapeutics.