20 years on the front line of UChicago cancer research

Research technicians and specialists play an indispensable, behind-the-scenes role that contributes to major scientific discoveries. Working alongside faculty researchers while assisting postdocs and graduate students, they are at the front lines, usually in the lab all day arduously and repetitively ensuring scientific data are reliable, valid and obtained in a timely manner.

Larry House is a research specialist at the University of Chicago, where he has worked since 1996. Over the past 20 years, he has conducted research on the pharmacology of anticancer drugs with research manager Jacqueline Ramírez, MS, in the lab of Mark Ratain, MD, and in the Pharmacology Core lab.

We spoke to him about how his role and the science have changed while he has been at UChicago.

UChicagoMed: What is the overall goal of the lab and how do you try to accomplish it?

Larry House: In a nutshell, we contribute to the development of effective and safe therapies for cancer patients.

What is the impact of your lab work?

Our translational research contributes to the development of novel anticancer drugs. We accomplish this by studying drug metabolism (the way a drug breaks down in the body to facilitate elimination; or, in the case of prodrugs, to activate the drug), pharmacokinetics (what the body does to the drug), and the relationship between drug exposure and toxicity. We investigate possible drug-drug interactions (DDIs) and ultimately, this work helps clinicians to better understand how to avoid them. We also investigate whether individuals with a particular genotype can tolerate higher drug doses, are at increased risk for drug toxicity, or are more likely to respond to treatment. 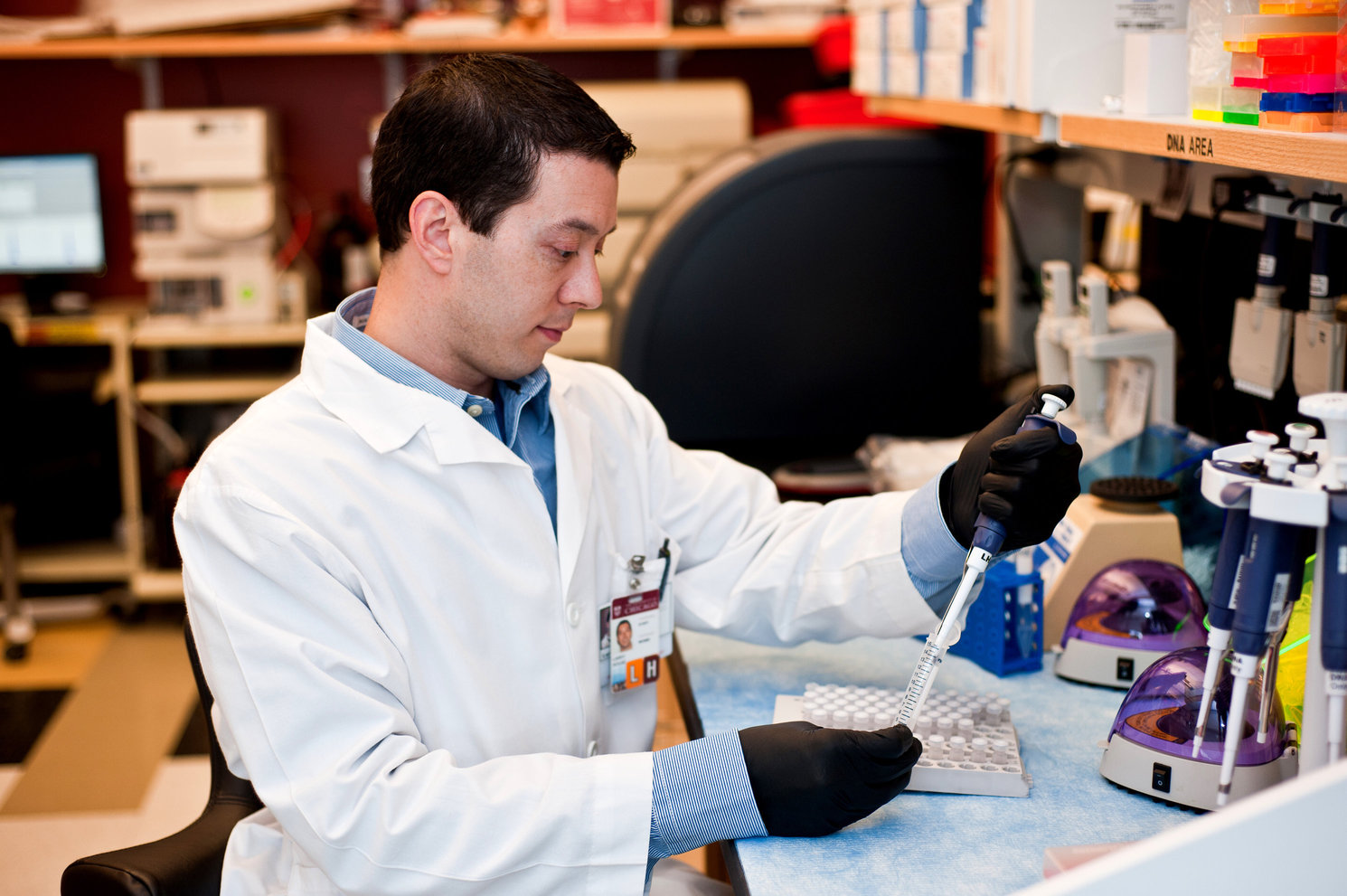 What do you do as a research specialist? How has your role changed since becoming a research technologist in 1996?

My responsibilities have expanded quite a bit since I came onto the scene in 1996. My starting role as a research technologist working in the Pharmacology Core lab was primarily to perform drug extractions and HPLC (high pressure liquid chromatography) analysis on blood samples from cancer patients undergoing chemotherapy to measure drug concentrations. These data are used to help us understand how the body absorbs, distributes and eliminates the drug and its metabolites (pharmacokinetics), and how these events relate to drug toxicity. Currently, my role as a research specialist is more focused on measuring gene expression changes in cells in response to various chemotherapies.

How did you get interested in studying cancer and working with Dr. Ratain?

My grandfather passed away from colon cancer in 1989. At the age of 16, I already knew I wanted to help battle the disease that took his life. I took a keen interest in the biological sciences and after completing a four-year degree, I was fortunate enough to join Dr. Ratain's lab.

What is the most rewarding part of your job?

Since I began working here, I have had the privilege of working with some of the best minds in the world. Among these have been faculty, clinical pharmacology fellows, postdocs, colleagues and summer students.

What type of lab equipment do you use in your experiments?

We have an LC-MS/MS triple quad mass spectrometer, which detects and quantifies drug components in the nanomolar range. For studies where we measure the expression of genes, we use a ViiA 7 Real-Time PCR machine, which is the current workhorse of our lab. These cutting-edge machines help us consistently obtain high quality and reliable data from our research samples.

How has the research methodology changed since you started here at UChicago?

Chromatography (the science of separation) has changed remarkably over the years. The way this works is pretty simple. Imagine if you filled a cylinder with sand, and then you put black dye in one end. If you pour water on top of the dye, the dye will pass through the sand with the water and out the other side. As the dye passes through the sand, different components of the dye start moving through the sand at different speeds, giving you separation. Now imagine that the grains of sand are extremely fine in diameter (10 micrometers), and instead of water we are using a chemical solution that is pumped through a pencil-sized column at 3,000 pounds per square inch. With these parameters, it would take the dye about 30 minutes to pass through and separate out. Well, since 1980 when this technology first came out, we are now able to use much smaller columns than a pencil (sand particle size: ~1.7 micrometer and column length: 3 centimeters). The pressure is now much higher -- around 15,000 pounds per square inch. So now the dye (solution) can go through the column in about one minute, compared to 30 minutes. So overall, the research has become much more efficient and productive when it comes to measuring drug concentrations and metabolites in our research samples. 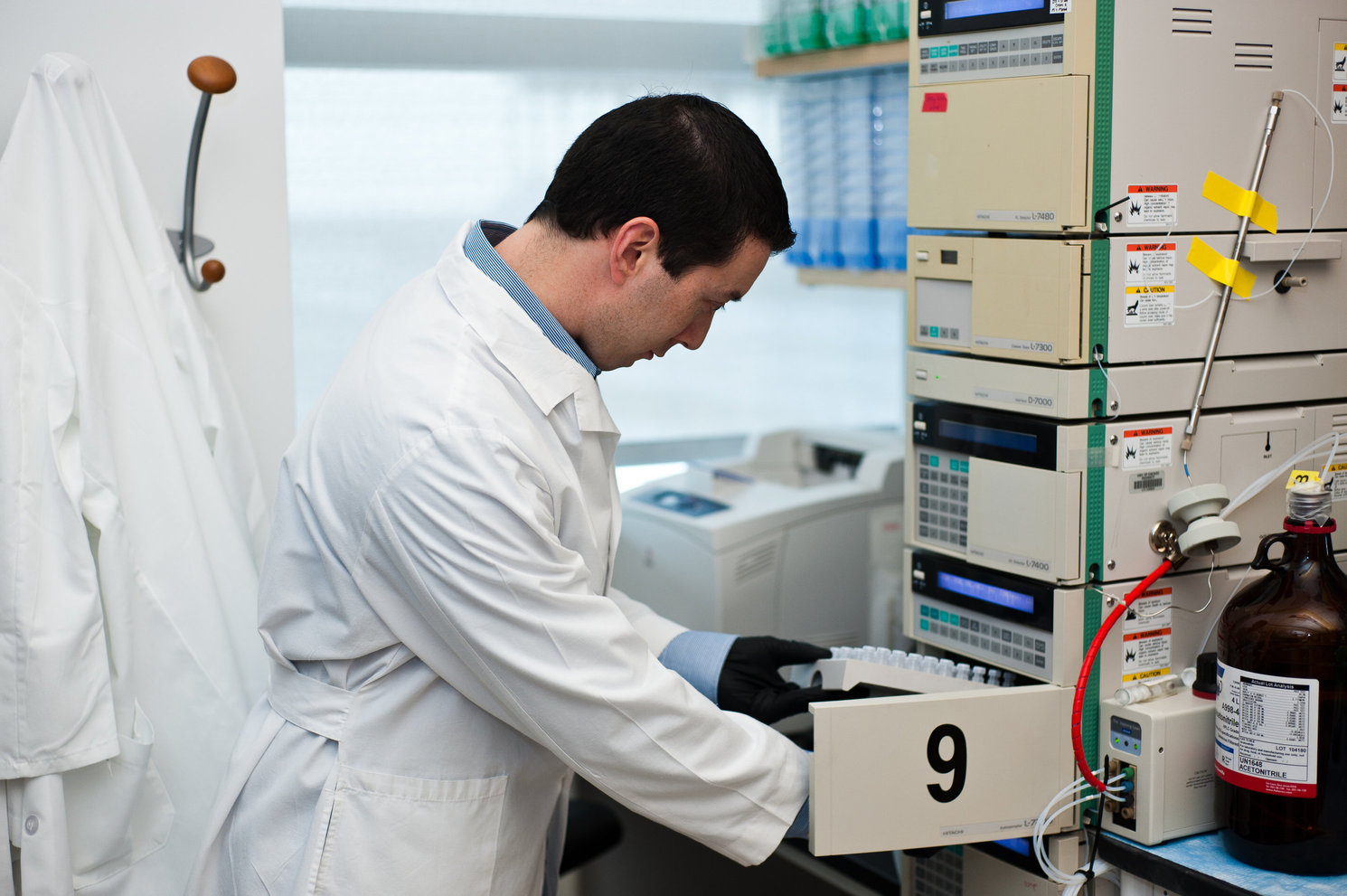 Less serious question – what is the weirdest or most interesting thing you have seen or had to deal with at the bench?

I was working on some patient samples in some test tubes, and after adding a chemical to them (ethyl acetate) I could tell they were mixing a little more vigorously than usual. Then all of a sudden, one of the test tube lids popped off the tube and into the ceiling. It really startled me but I managed to get the other 95 test tubes into the fume hood. It was kind of like champagne corks popping for the next five minutes. After the show, I realized that the warm temperatures in the room at the time contributed to the pressure buildup. Luckily, I had enough patient samples to repeat the experiment, and from then on, I worked in the cold room.

What advice would you give to research specialists or technicians out there just getting started?

Some days it may feel like you are not making progress, or the work is tedious. I look back on these days and realize that it was a necessary process in the grand scheme of things, and in order to answer the really interesting research questions, you need to put in the time to gather the data before we can make any conclusions and major discoveries.

What are your favorite hobbies outside of work and what are some things on your bucket list?

I like rock climbing, road bicycling and FPV quadcopter flying. Eventually I'd like to do some skydiving, scuba diving and paragliding. I guess you could say I like some excitement away from the bench to balance things out.

Dave is a 2nd-year postdoctoral fellow at The University of Chicago. He conducts research in the Human Behavioral Pharmacology Lab through The Committee on Clinical Pharmacology and Pharmacogenomics.