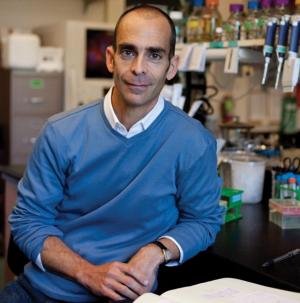 Joe Thornton, PhD, professor of ecology and evolution and human genetics at the University of Chicago, has been awarded a Friend of Darwin Award for 2019 from the National Center for Science Education. The NCSE is a national advocate and resource center for accurate and effective science education, particularly on politically threatened science topics like evolution and climate change-related science.

Thornton is one of three Friend of Darwin Award recipients who are being honored for their contributions to evolution education. In choosing Thornton for this year's award, the NCSE said, "We note your important scholarly contributions in the area of gene and protein evolution, as well as your willingness to engage in the public discourse, especially to explain with clarity why intelligent design proponents cannot use your work to support their unscientific ideas."

Thornton specializes in ancestral protein reconstruction, a technique that uses gene sequencing and computational methods to travel backwards through the evolutionary tree and infer the likely sequences of proteins as they existed in the deep past. Through biochemical methods, these ancient proteins can be synthesized and introduced into living organisms to study their function and create libraries of genetic variants of these proteins to replay all the possible paths of evolution under different scenarios.

"I am very grateful for this award from NCSE, which does such crucially important work to further science education and public understanding of evolution," Thornton said. "It means a great deal to me that NCSE thinks my laboratory’s work has been useful in beating back the forces of deliberate ignorance in our society."

The competitive protein battle royale within your cells
The single protein that helps keep motor neurons working smoothly
How fish fins evolved just before the transition to land
Genetic variation gives mussels a chance to adapt to climate change
UChicago research teams receive grants to map every cell type of the human gut
Calculating genetic links between diseases, without the genetic data
The time-traveling, globe-trotting scientists of the Committee on Evolutionary Biology
Past low social status leaves long-lasting scars in the immune system, new study finds
Investing in love and attention pays off for species that form long-term bonds