Scientists at the University of Chicago have created the first genetically modified animals containing reconstructed ancient genes, which they used to test the evolutionary effects of genetic changes that happened in the deep past on the animals' biology and fitness.

The research, published early online in Nature Ecology & Evolution on Jan. 13, is a major step forward for efforts to study the genetic basis of adaptation and evolution. The specific findings, involving the fruit fly's ability to break down alcohol in rotting fruit, overturn a widely-held hypothesis about the molecular causes of one of evolutionary biology's classic cases of adaptation.

"One of the major goals of modern evolutionary biology is to identify the genes that caused species to adapt to new environments, but it's been hard to do that directly, because we've had no way to test the effects of ancient genes on animal biology," said Mo Siddiq, a graduate student in the Department of Ecology and Evolution at the University of Chicago, one of the study's lead scientists.

"We realized we could overcome this problem by combining two recently developed methods-statistical reconstruction of ancient gene sequences and engineering of transgenic animals," he said. 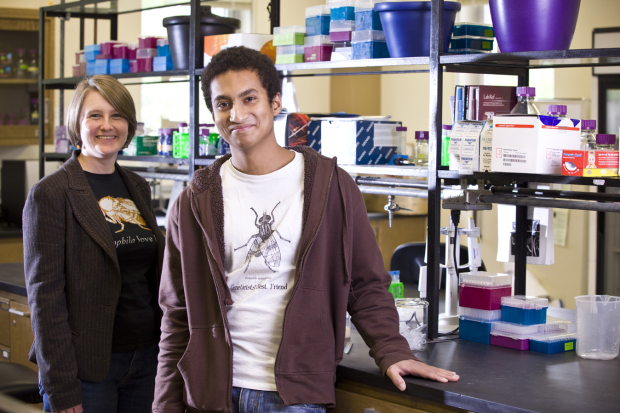 Until recently, most studies of molecular adaptation have analyzed gene sequences to identify "signatures of selection"-patterns suggesting that a gene changed so quickly during its evolution that selection is likely to have been the cause. The evidence from this approach is only circumstantial, however, because genes can evolve quickly for many reasons, such as chance, fluctuations in population size, or selection for functions unrelated to the environmental conditions to which the organism is thought to have adapted.

Siddiq and his advisor, Joe Thornton, PhD, professor of ecology and evolution and human genetics at the University of Chicago, wanted to directly test the effects of a gene's evolution on adaptation. Thornton has pioneered methods for reconstructing ancestral genes-statistically determining their sequences from large databases of present-day sequences, then synthesizing them and experimentally studying their molecular properties in the laboratory. This strategy has yielded major insights into the mechanisms by which biochemical functions evolve.

Thornton and Siddiq reasoned that by combining ancestral gene reconstruction with techniques for engineering transgenic animals, they could study how genetic changes that occurred in the deep past affected whole organisms their development, physiology, and even their fitness.

"This strategy of engineering 'ancestralized animals' could be applied to many evolutionary questions," Thornton said. "For the first test case, we chose a classic example of adaptation how fruit flies evolved the ability to survive the high alcohol concentrations found in rotting fruit. We found that the accepted wisdom about the molecular causes of the flies' evolution is simply wrong."

The fruit fly Drosophila melanogaster is one of the most studied organisms in genetics and evolution. In the wild, D. melanogaster lives in alcohol-rich rotting fruit, tolerating far higher alcohol concentrations than its closest relatives, which live on other food sources. Twenty-five years ago at the University of Chicago, biologists Martin Kreitman and John McDonald invented a new statistical method for finding signatures of selection, which remains to this day one of the most widely used methods in molecular evolution. They demonstrated it on the alcohol dehydrogenase (Adh) gene-the gene for the enzyme that breaks down alcohol inside cells-from this group of flies. Adh had a strong signature of selection, and it was already known that D. melanogaster flies break down alcohol faster than their relatives. So, the idea that the Adh enzyme was the cause of the fruit fly's adaptation to ethanol became the first accepted case of a specific gene that mediated adaptive evolution of a species.

Siddiq and Thornton realized that this hypothesis could be tested directly using the new technologies. Siddiq first inferred the sequences of ancient Adh genes from just before and just after D. melanogaster evolved its ethanol tolerance, some two to four million years ago. He synthesized these genes biochemically, expressed them, and used biochemical methods to measure their ability to break down alcohol in a test tube. The results were surprising: the genetic changes that occurred during the evolution of D. melanogaster had no detectable effect on the protein's function.

Working with collaborators David Loehlin at the University of Wisconsin and Kristi Montooth at the University of Nebraska, Siddiq then created and characterized transgenic flies containing the reconstructed ancestral forms of Adh. They bred thousands of these "ancestralized" flies, tested how quickly they could break down alcohol, and how well the larvae and adult flies survived when raised on food with high alcohol content. Surprisingly, the transgenic flies carrying the more recent Adh were no better at metabolizing alcohol than flies carrying the more ancient form of Adh. Even more strikingly, they were no better able to grow or survive on increasing alcohol concentrations. Thus, none of the predictions of the classic version of the story were fulfilled. There is no doubt that D. melanogaster did adapt to high-alcohol food sources during its evolution, but not because of changes in the Adh enzyme. 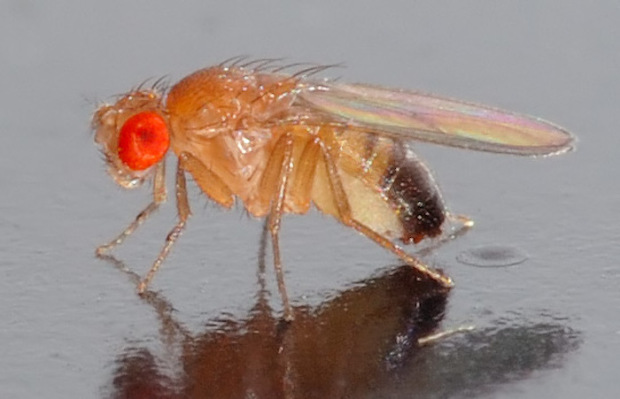 In the wild, D. melanogaster lives in alcohol-rich rotting fruit, tolerating far higher alcohol concentrations than its closest relatives, which live on other food sources.

"The Adh story was accepted because the ecology, physiology, and the statistical signature of selection all pointed in the same direction. But three lines of circumstantial evidence don't make an airtight case," Thornton said. "That's why we wanted to test the hypothesis directly, now that we finally have the means to do so."

Siddiq and Thornton hope that the strategy of making ancestralized transgenics will become the gold standard in the field to decisively determine the historical changes in genes to their changes on organisms' biology and fitness. For his part, Kreitman, who is still a professor of ecology and evolution at UChicago, has been supportive of the new research, helping advise Siddiq on the project and sharing his vast knowledge about molecular evolution and Drosophila genetics.

"From the beginning, Marty was excited about our experiments, and he was just as supportive when our results overturned well-known conclusions based on his past work," Siddiq said. "I think that's extremely inspiring."

The study, "Experimental test and refutation of a classic case of molecular adaptation in Drosophila melanogaster," was supported by the National Science Foundation, the National Institutes of Health, the Howard Hughes Medical Institute, and the Life Sciences Research Foundation.

The competitive protein battle royale within your cells
The single protein that helps keep motor neurons working smoothly
How fish fins evolved just before the transition to land
Genetic variation gives mussels a chance to adapt to climate change
UChicago research teams receive grants to map every cell type of the human gut
Calculating genetic links between diseases, without the genetic data
The time-traveling, globe-trotting scientists of the Committee on Evolutionary Biology
Past low social status leaves long-lasting scars in the immune system, new study finds
Investing in love and attention pays off for species that form long-term bonds