Around 385 million years ago in the Devonian age, a strange, two-and-a-half-foot-long shark died and drifted to the bottom of the sea, over what is now the Rhine River valley. Gladbachus adentatus, named after the German city near where it was found, wasn’t the only one of its kind, but it’s the only surviving fossil of the species we have today.

The evolutionary descendants of Gladbachus died out, but new analysis of the fossil is helping build out the rest of the shark family tree. And based on its odd assortment of features from both sharks and bony fishes, scientists now think we can push back the date for humanity’s last common ancestor with great whites to 440 million years ago.

“Sharks aren’t as primitive as generally assumed,” said Michael Coates, a paleontologist at the University of Chicago who led the new study of Gladbachus. “It’s a bit of a textbook cliché that the sharks you see swimming around today look much like their earliest ancestors. But that's partly because people are uncertain of what our last common ancestors looked like.”

Part of the problem is that the fossil record for sharks is thin. Because their cartilage skeletons don’t fossilize very well, there are very few specimens that have survived that long; discovery of a well-preserved, intact new one can add significant insight into the origins of these ancient fishes. 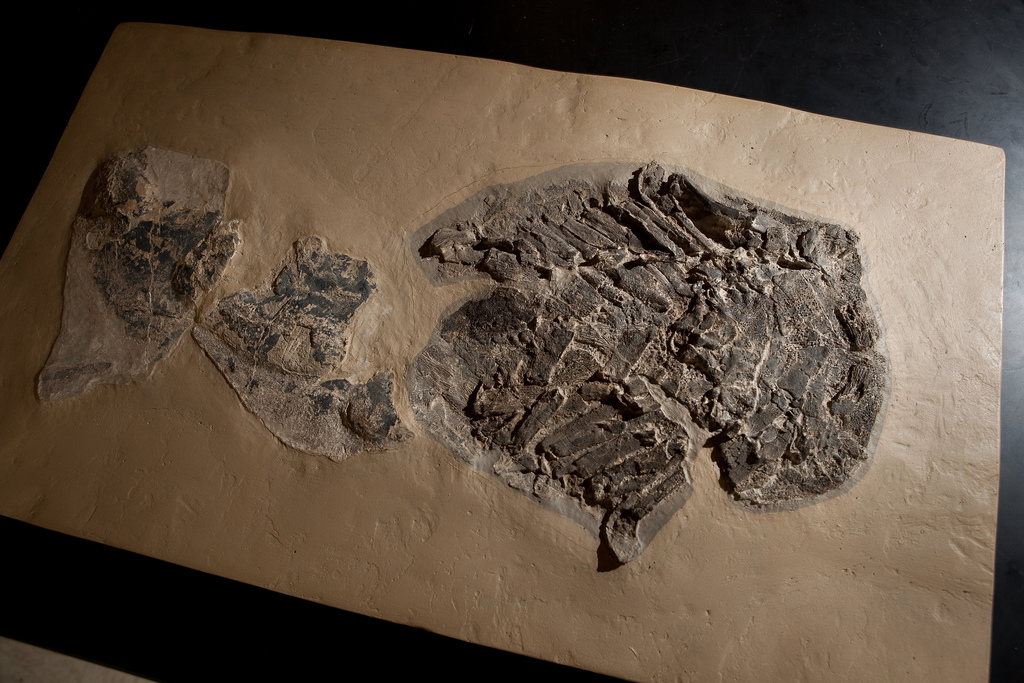 Gladbachus, now housed at Cambridge University in the United Kingdom, was first described in 2001. The fossil, compressed flat over time, comprises much of the shark’s jaws, teeth, skull, gill arches and scales.

It’s encased in a slab of resin with only the top portions visible, so Coates and his colleagues had it CT-scanned at the University of Texas at Austin. Later, they took smaller samples to be scanned at the Advanced Photon Source at Argonne National Laboratory. The detailed images gave the researchers a full view from all sides of the specimen, along with a detailed look at the microscopic makeup of its cartilage, teeth and scales.

They discovered that Gladbachus has a grab-bag of features from both placoderms—an early, jawed type of fish that had armored plates on its head and thorax—and acanthodians, a group of small, spiny fishes that have characteristics of both sharks and bony fishes.

Acanthodians have unique, isolated scales that first appear in the fossil record 440 million years ago. The 385 million-year-old Gladbachus has more primitive scales, meaning its lineage must have split at an earlier point from the branch that led to acanthodians, modern sharks, and other jawed vertebrates, including humans.

This both widens and complicates the shark family tree. Instead of a single line of early, cartilaginous fish evolving into modern sharks, it appears that several branches experimented independently with shark-like features, such as the telltale gill slits already present in Gladbachus.

Coates suggests this is an adaptation for filter-feeding, as sharks with lightweight cartilage skeletons moved up in the water column. Thus, the primitive representation of sharks might be more like a docile basking shark, cruising around and hoovering up plankton. The menacing, saw-toothed killers we know and fear today came later as new species developed their predatory habits.

“Gladbachus sheds light on early experimentation with what we think of as shark-like characteristics,” Coates said. “Working with the new information from Gladbachus, we can assemble a basic outline of the earliest parts of the shark family tree. This moves forward our understanding of shark evolution, raising new questions as well as unfolding the early history of a major division of today's biodiversity.”

The study, "An early chondrichthyan and the evolutionary assembly of a shark body plan," was published January 3, 2018, in the Proceedings of the Royal Society B. Additional authors include John Finarelli from University College Dublin, Ireland; Ivan Sansom and Plamen Andreev from the University of Birmingham, United Kingdom; Katherine Criswell from Cambridge University, United Kingdom; and Kristen Tietjen, Mark Rivers, and Patrick La Riviere from the University of Chicago.