Several rooms apart in the University of Chicago Medicine ICU, Sarah McPharlin and Daru Smith were on an unexpected journey into the record books, forging a unique friendship along the way.

Both 29, they became the first patients to receive back-to-back triple-organ transplants to replace failing hearts, livers and kidneys. The procedures took place from Dec. 19 to 21, 2018. A holiday miracle, some called it.

According to federal data, it is the first time a U.S. hospital has ever performed more than one of these complex procedures within one year, much less within 27 hours. Their cases are the 16th and 17th time this type of triple-organ transplant has ever been performed in this country.

With the addition of these two cases, UChicago Medicine has now performed six of these procedures, more than any other institution in the world. Continue reading

Daru and Sarah were an inspiration to each other as they recuperated. And they hope publicity about their cases will raise awareness about organ donation.

[MUSIC PLAYING] When Sarah McPharlin was only 11 years old, she got very sick. She had a virus that led to the need for a heart transplant. 17 years later, she was sick again. This time she needed a new heart, liver, and kidney. One hospital she visited in her home state of Michigan told her family to start making end of life preparations.

It seemed like a dead-end street, and we were given palliative care, and some hospice talked.

Hundreds of miles away, a truck driver from the south side of Chicago felt sick. He had a cold he couldn't shake. He ended up in the emergency room at the University of Chicago Medicine. He got news that he couldn't believe-- a condition called sarcoidosis was causing multiple organs to fail. He thought of his three-year-old son.

You keep on pushing, but you never give up. It was just getting the best of me.

The two ended up at U Chicago Medicine, where they became friends, each encouraging the other through the difficult process.

It was really cool that didn't learn. I didn't know both of us arranged for the same thing, let alone be the same age. And I really think it'll be cool to see how we both advance and do afterwards.

Daru had a match for the triple transplant first, and Sarah was waiting for a donor. Then, in the middle of Daru's surgery, something incredible happened. A second donor, a match for Sarah, was found. No hospital has ever done two triple organ transplants of this kind in the same year, let alone back-to-back, but the staff at U Chicago Medicine knew they could do it. They had to do it.

Need to find the strength and the power. And actually, there is a lot of adrenaline involved.

Doing two marathons back-to-back was not difficult, realizing what the end result was going to be-- that we were going to be able to help both these people.

The surgeries took 37 hours, and both transplants were successful.

Media from all over the world picked up the story.

Other hospitals actually turned Sarah away, and one even suggested end of life care. But then she met Daru, and their lives changed course-- together.

You're 100% right. This is the rarest it can be. We never in our dream thought it would be so close.

In tonight's Inspiring America, two strangers who beat the odds and made medical history now bonded through incredible lifesaving gifts.

A remarkable achievement-- said to be the first time that a US hospital has performed back-to-back triple organ transplant surgery.

The news touched millions of people.

I'm reminded, on a regular basis, what a special institution this is and how we can solve particularly difficult, serious problems.

Sarah went home first. It's hard to leave. We've built up a great relationship. Everyone was loving and respectful.

Make me happy. That's the happiest part. I get to see my baby. I don't know, every time I just think about him, I'll be breaking down.

Each with a new chance at life.

Triple transplant patients Daru Smith, left, and Sarah McPharlin, right, bonded while they spent weeks in the hospital waiting for heart-liver-kidney transplants and became friends during group physical therapy at the University of Chicago Medicine.

Sarah and Daru spent weeks in the hospital before their back-to-back triple-organ transplants, which took place from Dec. 19-21, 2018. During that time, they’d walk and exercise together in the cardiac intensive care unit at UChicago Medicine’s Center for Care and Discovery.

An Expert Team of Physicians

Daru, 29, was first diagnosed with multi-system sarcoidosis in 2013. The rare and difficult-to-diagnose condition causes clusters of inflammatory cells to form in organ tissues, which can sometimes lead to an irregular heart rhythm and even heart failure. In addition to impacting his heart, sarcoidosis led to significant liver and kidney dysfunction.

A truck driver from Chicago’s South Side, Daru calls his 3-year-old son “my life motivation,” and hopes to explore a career change, as well as the possibility of becoming a motivational speaker. His first order of business after getting released on Jan. 17, 2019, was to schedule a date to visit with the pre-schooler.

An occupational therapist from Grosse Pointe Woods, Mich., Sarah received her first heart transplant when she was just 12 after contracting a rare inflammatory condition of the heart called giant cell myocarditis. But a variety of complications over the next 17 years led to failure of her transplanted heart. Fluid began to accumulate in her legs and abdomen, damaging her liver and kidney.

Sarah spent Christmas 2018 recuperating in the hospital with her family by her side, including her two sisters Emily and Katie. She hopes to be able to return to work and her hobbies once she’s fully recovered and said she’ll always be grateful to families of organ donors everywhere. She plans to continue to be an advocate, raising awareness about organ donation.

16th Heart-Liver-Kidney Recipient in the USA

Daru gets his vitals taken by UChicago Medicine intensive care unit nurse Kimberly Wieszchowski, RN, BSN. Smith spent more than two months in the hospital before, during and after his transplants. He is the 16th person in the U.S. to receive a rare heart-liver-kidney transplant.

17th Heart-Liver-Kidney Recipient in the USA

Jeevanandam shows Sarah photos from her heart transplant while her mother, Dianne, looks on. Sarah is the 17th person in the U.S. to undergo a successful heart-liver-kidney transplant, which took place only hours after Daru’s surgery was completed. Six of those 17 surgeries have been performed at UChicago Medicine; Jeevanandam has performed the heart transplants in each of those cases.

Working Together to Provide Complex Care

Multidisciplinary teams rounded on the two patients every day, including heart failure experts, and representatives from the heart, liver and kidney transplant teams, along with pharmacists, residents, fellows and others.

A Quilt from Her First Transplant

Both Sarah and Daru had stuffed heart pillows in their hospital rooms while they recovered from their triple-organ transplants. Sarah also brought the same heart quilt that she had with her when she got her first heart transplant at 12.

A Vision Board for Motivation

Sarah’s friends and family sent her cards, notes, games, and even a special poster to decorate her hospital room. She added a hand-drawn fireplace with Christmas stockings to her ICU room and plans to frame this sign.

Last Day in the Hospital

Sarah was discharged Jan. 7, 2019. On her last day in the hospital, a portion of her transplant team stopped by to give her hugs during her send off.

Daru celebrated Thanksgiving, Christmas, New Year’s, and his 30th birthday at UChicago Medicine. He was discharged Jan. 17, 2019, after almost 10 weeks in the hospital.

The Importance of Organ Donation

Daru and Sarah said they hope their stories raise awareness about the importance of organ donation and inspire others to register to become organ donors. Each organ donor can save up to eight lives. 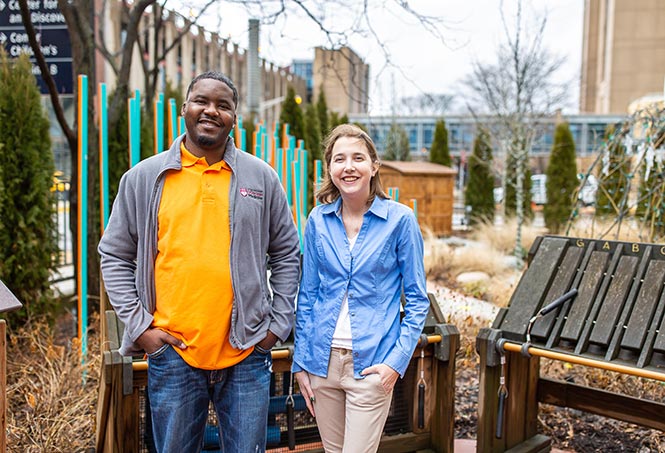 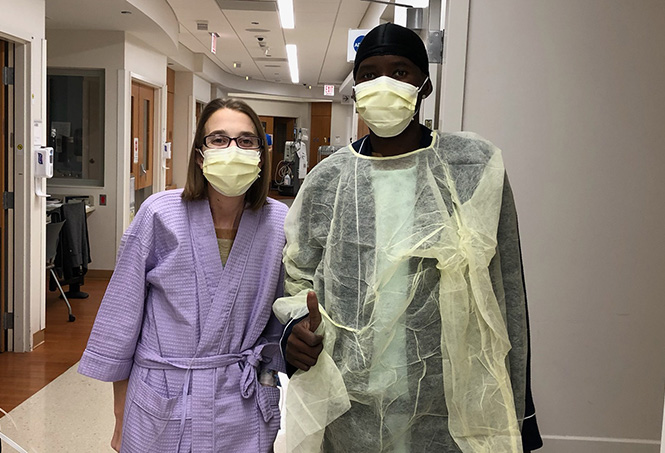 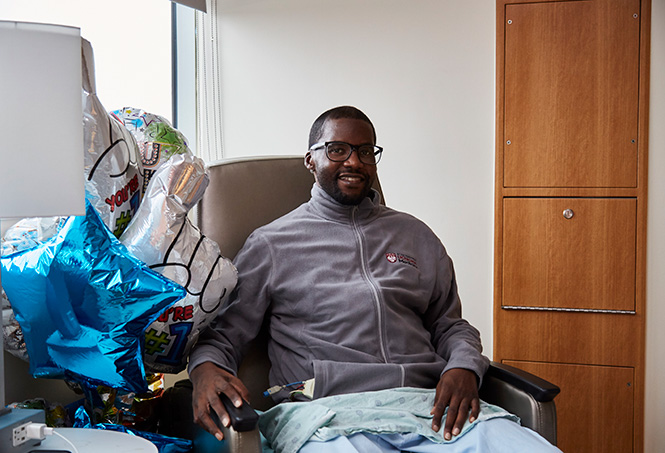 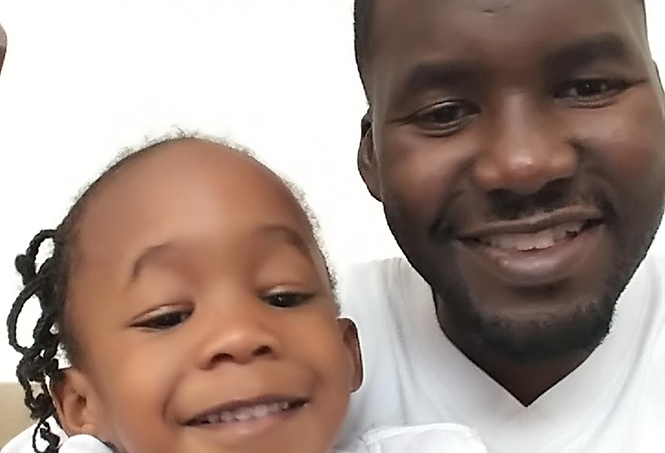 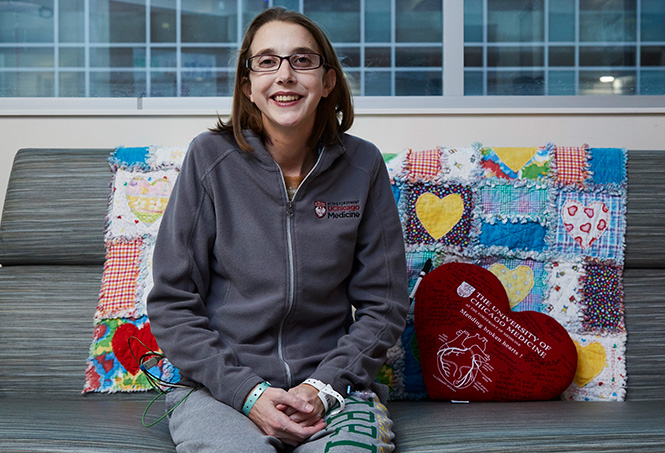 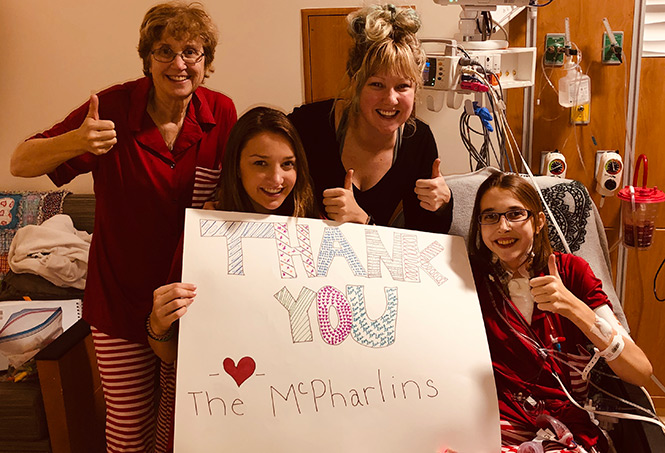 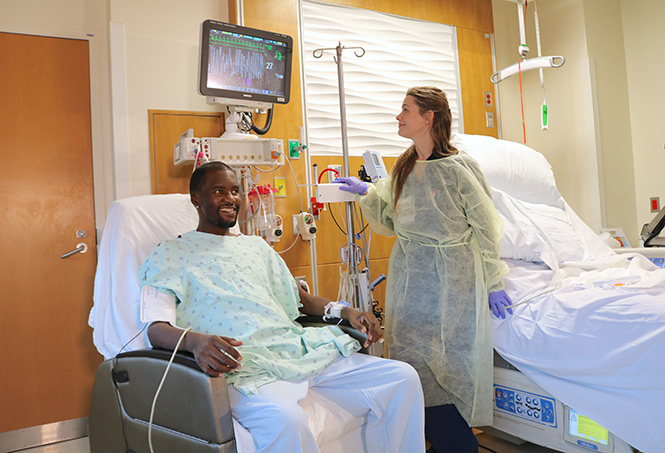 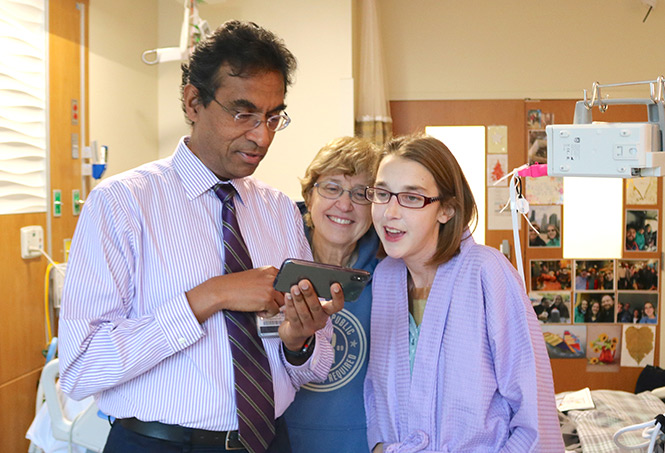 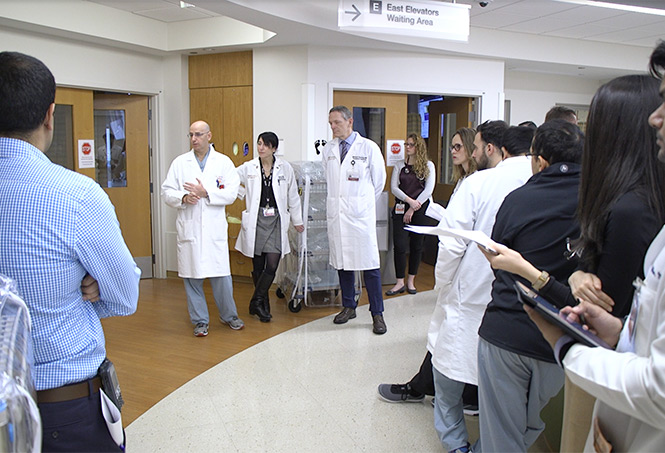 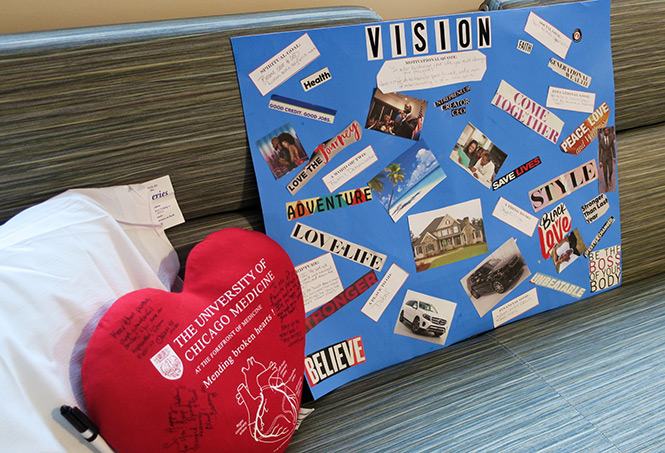 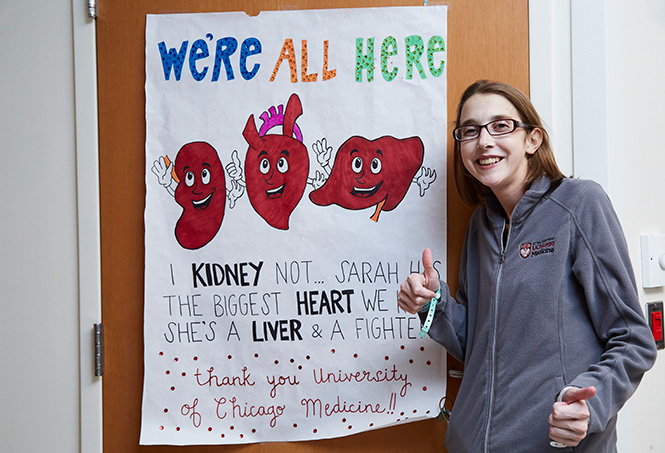 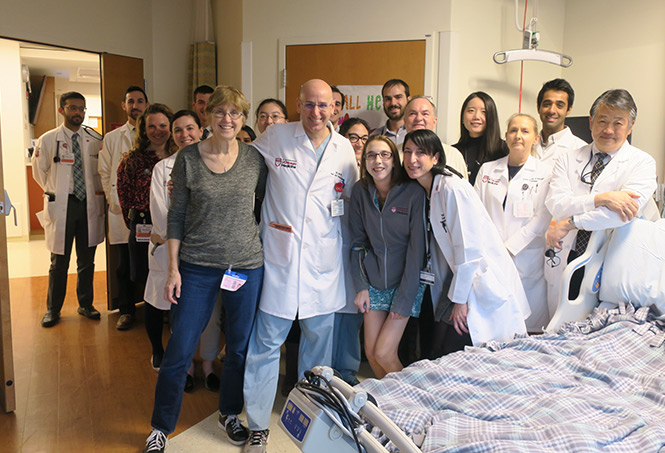 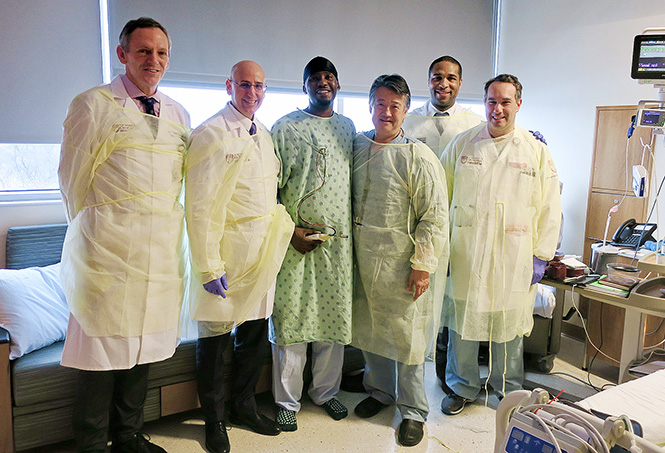 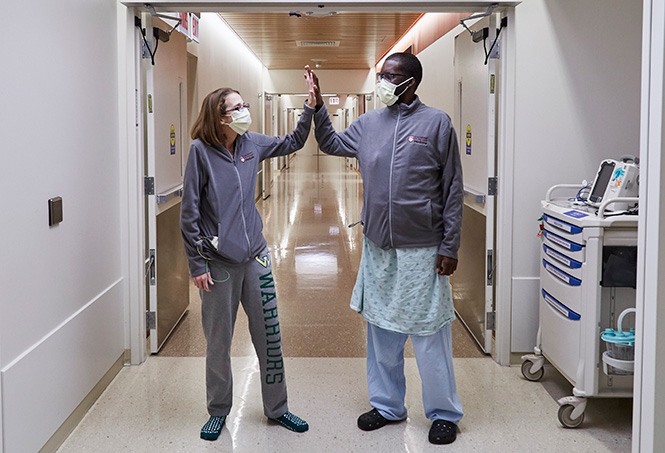 With one of the nation’s leading organ transplant programs, UChicago Medicine has performed more heart-liver-kidney transplants than any other institution. We continue to build upon our success and history of innovation to bring the best possible outcomes to our patients, including (left to right) Neil Perry, Daru Smith, Sarah McPharlin and Apurva Patel who all received triple-organ transplants within a year’s time. 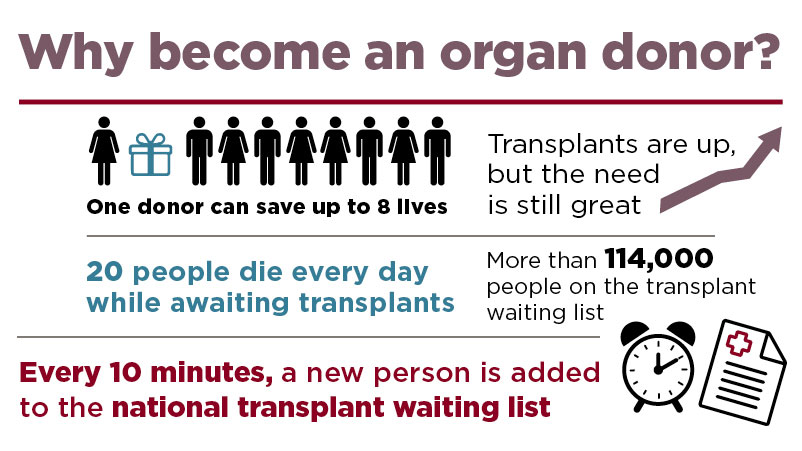 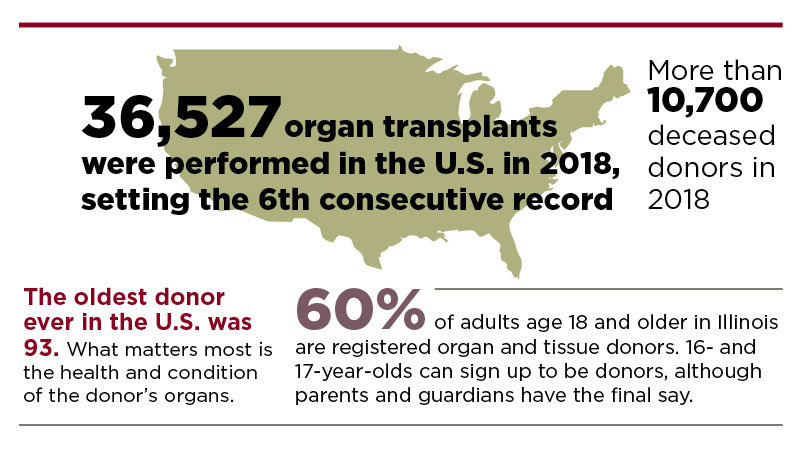 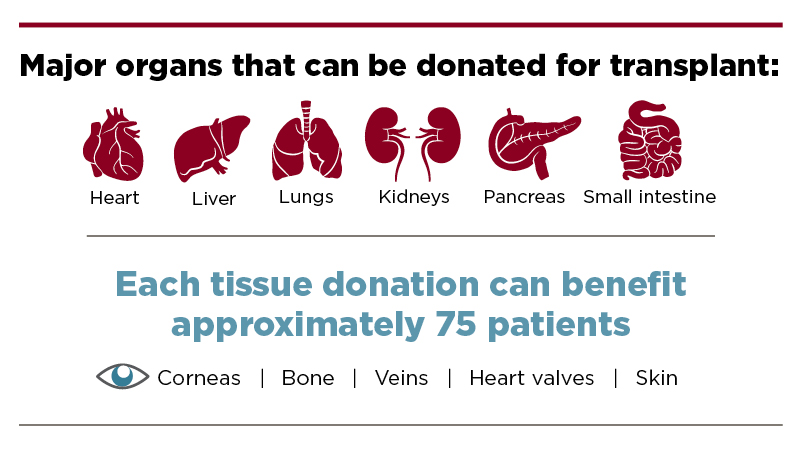 A History of Breakthroughs

UChicago Medicine physicians and scientists discovered breakthroughs that shaped modern medicine and advanced the forefront of science and clinical care.

We are proud to continue advancing the forefront of health every day by bringing research to reality. 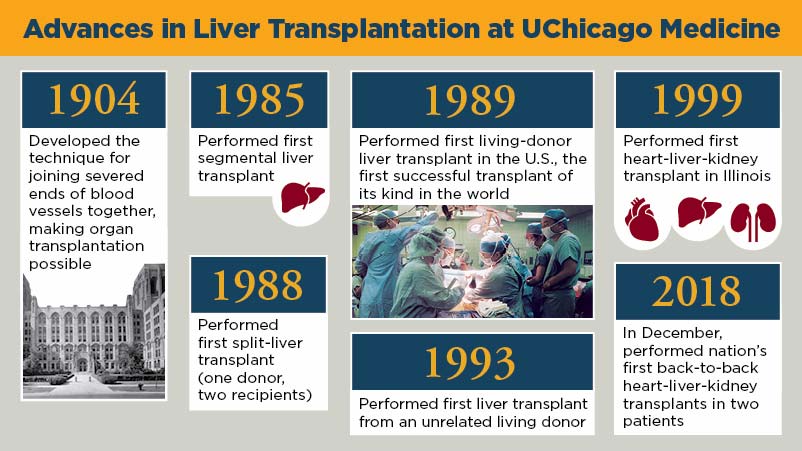 At the Forefront of Transplantation